What’s the currency in Ghana? 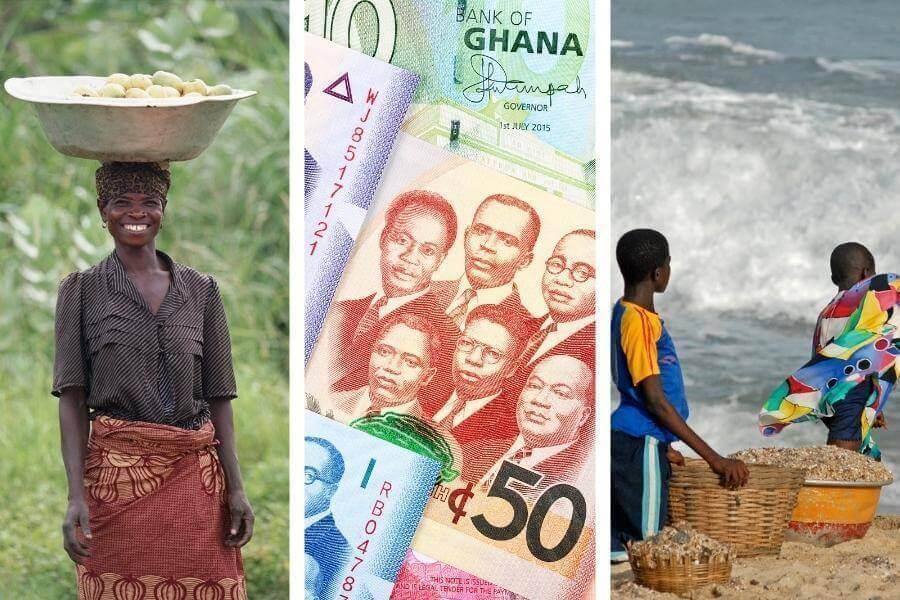 Ghana has a fascinating history and the evolution of its currency is also an interesting topic. Today the Ghanaian currency is one of the strongest in all of Africa. But it hasn't always been this way and the past twenty years there have been dramatic changes in Ghana’s currency situation.

In this post we’ll give an overview of Ghana’s currency, including its history and where it stands in the world of global currencies today.

Ghana’s currency is called the cedi. The name of the currency is abbreviated to GHC or GHS. The currency was introduced in 2007 and is the fourth tender in Ghana’s history. The Ghana cedi was the highest-dominated currency unit issued in Africa in the year when it was issued.

The word cedi derives from the Akan word for cowry shell, once used as a medium of exchange, store of wealth, and religious article until British colonizers demonetized it as a form of currency in the early twentieth century.One cedi can be divided into 100 pesewas» (Culturetrip).

The history of the Ghanaian cedi

What makes the currency unique? The current Ghanaian cedi is the third of its kind. Ghana gained independence from British colonial rule in 1957, but it was not until 1965 that the birth of the cedi occurred.

In 1965 Ghana decided to «leave the British colonial monetary system and adopt the widely accepted decimal system. Accordingly, Cedi notes and Pesewa coins were introduced on the 19th July, 1965 to replace the Ghana pounds, shillings and pence» (ghanaandbeyond).

However, soon after the introduction of the first cedi came the second cedi. The new military government wanted to replace the existing currency which bore the image of the deposed President and former Prime Minister of Ghana, Kwame Nkrumah. On the 17th February 1967 the second cedi also known as the ‘New Cedi’ was introduced.

After years of inflation troubles, the third cedi now known as the ‘Ghana Cedi’ was introduced. It was issued largely to deal with the problems of inflation that had been hampering the Ghanaian economy for years.

The overall history of the Ghanaian currency extends back much further than colonial rule. The cedi’s history alone shows you the storied history of Ghana throughout the twentieth and twenty-first century.

Why is it important to know the history of the Ghanaian currency?

The strength of a currency is tied, among other elements, to the strength of a country's economy. Knowing the history of the Ghanaian currency also gives you some information about the development of Ghana over the century. The currency reflects the social and economic changes that have occurred during that period.

«Experts have, over the years, attributed the West African country's currency position to the country's democratic ideals and its well-managed economy» (Face2Face). The cedi’s history shows the progression of Ghana as a nation. It demonstrates how over the years it has elevated its position on the world stage.

Ghana is still largely a cash based society. Trade in most areas of the country has been dependent on cash for many years. But what about the state of the Ghanaian cedi today?

In 2019, Ghana had the world's fastest growing economy. It’s exportation of gold and oil and it’s cooperation with other nations strengthened the cedi. During the COVID-19 pandemic the cedi has remained relatively robust compared to the currencies of other African nations.

Economic and currency analyst with Databank Research, Courage Mantey told Accra-based Joy FM in 2020,  «I think the cedi has done creditably well this year, especially when view within the context of historical standards [past cedi performances] and when viewed within the context of a global pandemic and what the market had accepted of currencies such as ours» (businessinsider). In the midst of global strife the Ghanaian cedi is still standing strong and enabling Ghanaians to be competitive on the world stage too.

Interesting facts about the Ghanaian cedi

We’ve looked at the history of the cedi and the state of the currency today but there are also many other interesting things about the Ghanaian currency.

These men are considered the founding fathers of the modern Ghanaian nation and were arrested back in 1948 for speaking out against British colonial rule. You can find their faces on the One, Ten, Twenty, and Fifty cedi notes.

In 2020, the cedi was the world’s best performing currency against the dollar (Bloomberg). The cedi’s exchange rate with major currencies around the world shows how strong the Ghanaian currency is today.

The average exchange rate of the pound to the cedi in 2020-2021 was £1 to 7.87 GHS. The historical exchange rates between Great Britain and Ghana have been relatively stable over the last year, fluctuating between highs of £1 to 8.15 GHS and bottoming out at £1 to 7.5 GHS. The Euro to Cedi exchange rate on average in 2021 has been 1 Euro to 6.90 Cedi.

Additionally, the average exchange rate in the past year from Swedish Kronor to Ghanaian cedi has been 1 SEK to 0.68 GHS. Knowing how the currency of Sweden and Great Britain compares to Ghana’s cedi gives a good indication of how the cedi is performing overall.

How can I send money to Ghana?

With Small World’s money transfer service you can safely send money to Ghana.

You can send money with Small World in five different ways. Our most popular option includes sending your funds directly to a bank account and transferring them to cash for your loved one to pick up from one of our many locations.

For many years we have been enabling people all around the world to send money to their family and friends. You too can make sure your money gets where it needs to be with Small World.