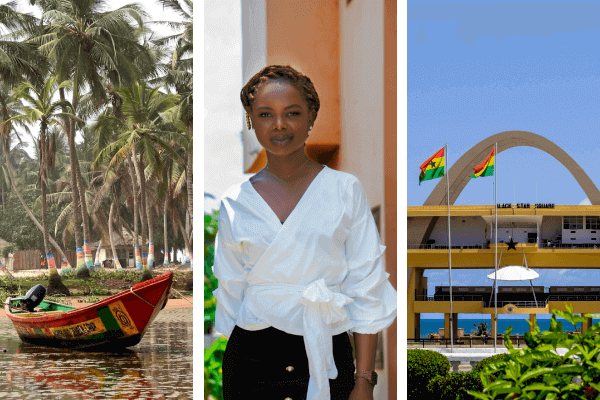 Ghana is a wonderful country blessed with a historic and diverse culture that is displayed in the people, the food, the music and the art in every city around the country. But what are some of the standout features of the Ghanaian culture? What interesting things about Ghana should you know about?

In this blog, we’ll explore some of the most interesting facts about Ghana so that you can learn a bit more about the country and what makes it so special.

All the way back in 1957, Ghana re-established themselves as one of the most powerful countries on the continent when they gained independence from the British Empire.

In that year, a new president called Kwame Nkrumah got power and a new flag, displaying the Pan-African colours of red, yellow, green and black, was adopted.

Celebrations commenced on the dawn of Ghana’s independence. Before colonisation, Ghana consisted of a number of independent kingdoms, including the Gonja, Dagomba, Ashanti and Fanti states. All these kingdoms are now unified under the Ghanaian flag.

If you have ever visited Ghana you may have seen colourful painted boxes shaped into various interesting figures. These are called fantasy or figurative coffins. They are functional coffins that are made as part of a custom of the Ghanaian people. They can be found across the country, from small towns to the larger Ghanian cities.

The elaborate decorations on the coffins are linked to the religious beliefs held within the country and are about the journey to the afterlife. They are a fascinating example of Ghana’s spiritual and artistic traditions.

Ghana has a fantastic footballing history. The men’s Ghana national football team has represented the country since the 1950s. It has won the prestigious Africa Cup of Nations four times - in 1963, 1965, 1978 and 1982. And whenever the Ghana national team qualifies for the World Cup, they receive ecstatic support across the world.

Their most recent success at the World Cup was in the 2010 World Cup in South Africa, where they became the third African team to reach the quarter-final stage.

The incredible diversity of culture in Ghana is most clearly seen in all the languages spoken across the country. There are around 50 indigenous languages with the major ones being Ga, Ewe, Dagaare, Akan, Dagbani. There are over eighty languages spoken throughout Ghana with English being the official language.

If you travel in the Northern Region you are likely to hear Dagbani and Mampelle. In the Upper West Region you may hear the Frafra and Waali languages. The country is also surrounded by Francophone countries like Togo, the Ivory Coast and Burkina Faso. So as well as the many indigenous languages and English, French is also spoken widely throughout the country.

In 2017 Ghana launched a nano-satellite into space. The GhanaSat -1 was the first object Ghana had ever put into space. The satellite was part of a bigger space related project called the Kyushu Institute of Technology Birds-1 program which is about helping countries build their first satellite.

For two years, the satellite was used to monitor environmental activities along Ghana’s coastline. And in 2019 the satellite de-orbited and returned to earth. The satellite is the first step for Ghana’s space program.

You can’t get a much more noble name for a country than Warrior King. ‘Ghana’ was the title given to kings of the medieval West African Ghana Empire. It is a title that reaches back to ancient eras and flourishing African empires and it also speaks to the commanding and vibrant modern Ghana nation.

Lake Volta in the southeast of Ghana is the largest artificial reservoir in the world. The lake has an enormous storage capacity of 24,000,000 acre-feet (153,000,000,000 cubic m) of water. The construction of the Akosombo Dam over the River Volta in the 1960s created the lake and since then it has served the people of Ghana in a number of ways. Lake Volta has proved to be a fantastic way for Ghana to generate electricity, provide transportation and irrigation.

He is a graduate from the University of Massachusetts and is the holder of at least four speed-related world records. This fact is as bizarre as it is interesting and truly serves as a testament to the wonderful exuberant and intriguing nature of the Ghanaian people.

In the Upper East Region of Ghana, in a place called Paga there is a sacred and ancient crocodile pong. The pond is home to a host of old and surprisingly docile crocodiles. They are armed with an impressive set of gnashers but apparently for many years they have been reluctant to use them against visitors.

Don’t be too scared. In fact the Paga Crocodile Pond is one of the premier tourist spots in the whole country because the crocs are so docile enough that visitors can get close and touch them. The crocodiles have a special relationship with the locals who treat them like pets and take care of them throughout the year. It is a fascinating place and definitely worth a visit!

P.S. If you want to know about other tourist attractions in Ghana don't hesitate to check out our other blog post!

Do you need a secure and seamless way to transfer money internationally? Maybe you want to support your loved ones in Ghana? Or maybe you want to ensure that your transactions with an overseas supplier are being carried out safely and quickly? Well, you can achieve all of that with Small World.

Small World is a global money transfer service that helps people send money internationally in a way that is easy and safe. For more than ten years we have been operating on a global scale and have built an enormous user base of 15 million customers. We help facilitate millions of transactions every year and we are continuing to expand globally to cater to the needs of more people in more countries.

If you want to learn more about Ghana check out our blog about The Ghanaian cedi.

You can transfer funds to Ghana with Small World via bank deposit, Airtime top-up, cash pickup or mobile wallet. We offer a variety of transfer services because we know that everyone’s financial situation is different. And we want to make Small World as inclusive and accessible as possible. So, if you need to send money to Ghana to choose Small World!