What is the currency of Sierra Leone? 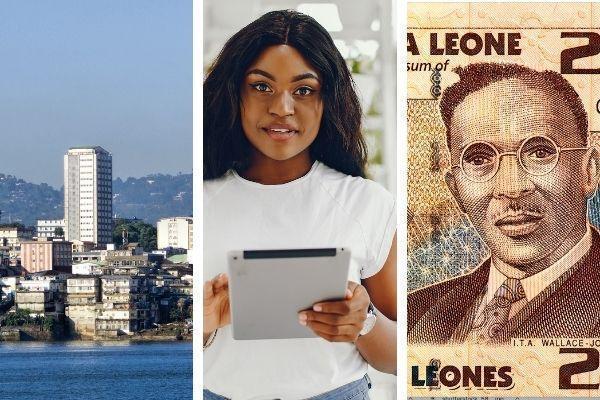 Located on the west coast of Africa, Sierra Leone is home to beautiful white beaches and a uniquely wonderful culture. If you have loved ones in Sierra Leone, or you’re thinking of moving there yourself, learning about the currency is a good thing to do.

In this blog we’ll be exploring everything you need to know about the currency of Sierra Leone. So you can make informed decisions when you travel or if you need to send money to those based in the country.

What currency does Sierra Leone use?

Wrapped up in the history of the leone are the events of the twentieth century. Examples include the country’s independence from the United Kingdom in 1961 and the Sierra Leone Civil War that began in 1991 and lasted until the twenty-first century.

The leone banknotes come in a variety of colors including red, brown, purple and a combination of blue and green on the 10,000 leone note. The neighbouring countries like Liberia and Guinea use their own unique currencies and many of the surrounding West African countries use the West African CFA franc.

How is the Leone recognized?

The leone is recognized by the abbreviated symbol: Le, and by the international currency code SLL. The leone is subdivided into 100 cents but due to inflation, and the low relative value of the leone, denominations in cents are not used any more.

The coins in current circulation include the Le 10, Le 50, Le 100 and the Le 500. The banknotes that are still circulating are in denominations of 1,000, 2,000, 5,000 and 10,000 leones. With the introduction of decimal currency in 1964, a few years after independence, the unit name was originally called Shillings before the unit name Leone was finally chosen.

The history of the Leone

The leone was introduced in 1964 to replace the British West African pound. In the early years of the leone the size and look of the coins were based on the oldBritish West African versions. The first leones had the depiction of Sir Milton Margai, the first prime minister of Sierra Leone.

Today, the faces on the currency are different. The current leone in circulation features important national figures and political leaders such as Bai Bureh, a Sierra Leone ruler who fought against British rule and Sengbe Pieh, a man of the Mende people who led a slave revolt on the Spanish slave ship La Amistad.

Throughout the country's history the leone has struggled to stay stable and often suffers from inflation problems. Trade with other countries in the region has helped to improve the fortune of the leone. However, inner turmoil within the country, such as the civil war in the 1990s, has meant that the leone has not developed into a strong currency.

The notes currently circulating were issued in 2010 and made to be smaller, more durable and more secure than the old banknotes. Recently, due to the high inflation rate of the leone, a 20,000 leone banknote has been suggested.

In response to inflation, in August 2021 the central bank of Sierra Leone announced that there will be a New Leone printed on smaller bills and three zeros will be removed from the currency.

So we know what the leone looks like today, but what about it’s value? Let’s take a look at some exchange rates which will give us a good idea of the value of the leone on a global scale.

Knowing these exchange rates will also help you if you are travelling to Sierra Leone or if you want to send money to loved ones based in Sierra Leone.

How can I send money to Sierra Leone?

You can send money to Sierra Leone with Small World via Cash Pickup or Mobile Wallet. Both methods are quick, simple and secure.