Top Ten Things to See and Do in Venezuela 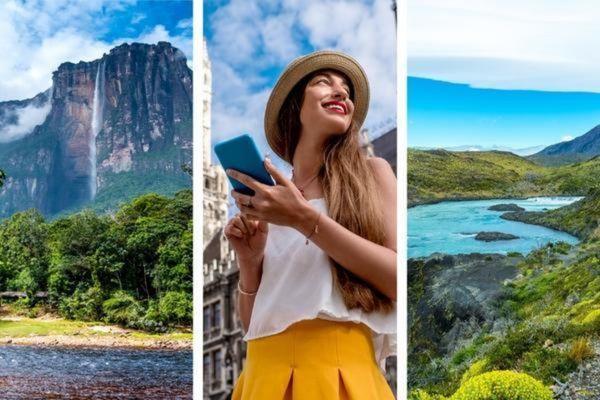 Venezuela is known for its complete natural beauty. It is regularly described as one of the most picturesque places in the world. It is also known for the untapped potential of its tourism industry, with so many fantastic sights and sounds as yet undiscovered. From mile-high mountains to stretches of sparkling sea and sand, Venezuela has something for every kind of traveler. Before traveling it is vital to do your research and learn all about the country, its traditions, its currency and more.

We’re exploring some of the most awe-inspiring and beautiful attractions of Venezuela below, and our top ten will cover:

Celebrating the natural and organic beauty of Venezuela is easy with a visit to El Ávila National Park. The park stretches along the Caribbean coast north of Caracas and has been preserved as a park since 1958. It’s a much-loved attraction and playground for local city dwellers and home to the rugged Cordillera de la Costa mountain range. Over 100 species of butterflies and 500 species of birds call this park their home, including many you will never find anywhere else in the world.

For a taste of traditional, rural life in Venezuela, the sleepy village of Galipán does not disappoint. This small mountain village is the perfect antidote to the busy urban feel of the capital city Caracas yet lies just 15km away. Galipán is popular with tourists wanting to get a feel for real Venezuelan life and welcomes visitors from the city regularly. There is a beautiful church to admire and a central plaza where you’ll find a local restaurant and a chance to try traditional Venezuelan delicacies. If you’re very lucky, you may visit on market day and have the chance to buy handicrafts and other goods in the plaza too.

The second president of Venezuela, Simón Bolívar, is renowned for his contribution to the country’s history and its freedom. The museum exploring his life is housed in a classic colonial house in the historic quarter of Caracas. Known as one of the most famed revolutionaries of South America, the museum is a chance to get better insight into Bolívar’s life and his importance to the Venezuelan people. The Casa Natal (birthplace) of Bolívar has been reconstructed in the period style and is home to a vast array of Venezuelan artworks depicting the War of Independence and Bolívar himself.

For a bit of fun and a relaxing day out, nothing beats a water park. The tropical sun beats down every day in Venezuela so cooling off is a must. Dunas Water Park combines the fun of water slides with a relaxing beach, a lazy river and a traditional theme park with attractions for visitors of all ages. Dunas Water Park has something to keep everyone entertained and even has a skating rink for the whole family to enjoy.

Angel Falls is probably Venezuela’s best-known attraction. It is the world’s highest uninterrupted waterfall, measuring 979 meters high. It is a spectacular sight, and nothing else on earth compares to its impressive drops, which fall over the Auyantepui mountain in the Canaima National Park. Angel Falls got its name from an adventurous American pilot, Jimmie Crawford Angel, who first spotted the waterfall when searching for gold in the 1930s.

Isla Margarita is the largest island off the northern coast of Venezuela and a dream for fans of water sports and nautical exploration. Described as the Pearl of the Caribbean, the island is lined with miles of pristine beaches and is popular for beachcombing adventures as well as surfers. Isla Margarita also has a fantastic nightlife, with salsa clubs and beach bars open all hours and ensuring there’s plenty of fun to be had.

The Cable Car at Merida

Venezuela has so many mountainous towns and villages that cable cars are quite common, but the Teleferico de Merida is particularly special. The cable car is unlike any other in the world. It stretches 12.5km, and visitors can enjoy a ride with a local guide, ready to tell you everything about the car’s history and construction and point out amazing sights across Venezuela as you ride. The route runs from Barinitas to Mount Espejo and is divided into 4 parts: La Aguada, Pico Bolivar, La Montana and Loma Redonda. Expect to see some of the finest panoramic mountain views possible on our planet.

The Henri Pittier National Park is the largest national park on the Venezuelan coast. It has a fairy tale-like feel as the tropical coastal scenery is both unique and captivating. This park covers 18 million hectares, and much of it is still undiscovered and unexplored. As a rainforest park, this is your chance to explore a little of the Amazon rainforest. Some of the world’s most fascinating flora and fauna call Henri Pittier National Park home, and you may spot a wide range of exotic species from monkeys to sloths and river dolphins to caiman. There are several different bays and beaches to explore in the park, and each bay has its own village and river basin and its own personality.

Founded in 1527, Coro is one of Venezuela’s oldest settlements. It is considered a UNESCO World Heritage Site and is known for its ancient architecture and historic buildings. The town is dotted with small one and two-storey buildings in bright pastel colors. Coro is the world’s only surviving example of a fusion of local traditional styles and architecture, and there are over 600 historic buildings to walk amongst.

The Orinoco River is one of the most spectacular and important rivers in the world. It is the third largest after the Amazon and the Congo and has been of consistent interest to explorers since Christopher Columbus first found it in 1498. The delta region is a perfect playground for adventurers. It is a starting point for many jungle expeditions and the chance to spot wildlife, including jaguars, alligators and anacondas.

Experience all Venezuela has to offer

As you can see, there is so much to explore in Venezuela. Here we’ve listed just ten wonderful attractions in the country, but you’ll surely be able to find more if you visit and explore yourself. What’s more, if you have family in Venezuela they will also have their favorite places.

You can also send money to Venezuela with Small World. Our service is ideal if you have family there or if you’re planning on travelling.

Small World is here to make your life easier and will ensure your money gets to loved ones in Venezuela.