The Land of Opportunity: The History of Peruvian Immigration to the United States 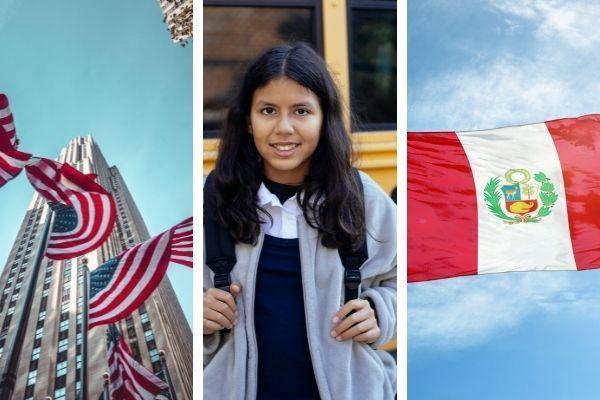 How many Peruvians and people of Peruvian descent live in the U.S. today? If you’re interested in this kind of question you may also be asking yourself: Why have so many Peruvians moved from their home nation to the United States in recent years?

The history of Peruvian immigration to the U.S. is a fascinating topic. To understand the historic movement of people from one country to another we need to take a look at the evolution of both countries.

So, what has life been like in Peru in recent years? What has it been like in the U.S. during that same period? And what is life like for Peruvian Americans today? In this blog we’ll be exploring everything you need to know about Peruvian immigration to the U.S. including:

The American dream is rooted in the Declaration of Independence. If all men are created equal with the right to life, liberty and the pursuit of happiness then America is the nation for dreamers and optimists. It is a land for people with strong aspirations and a desire to work hard.

The ‘American Dream’ is an ambition that anyone living in the United States can point to every time they try to achieve something. Over time the ‘American Dream’ has become an instantly recognizable phrase. You’re likely to hear it as much in popular culture as you do in classrooms and homes thanks to representations in the media and the experience of people who have truly made it in the U.S.

So, what was the American dream for early Peruvian immigrants to the U.S.? Many uprooted their life and moved to the United States in search of something better. They moved to the U.S. because of the promise of opportunity. After all, the U.S. is a nation of immigrants from all over the world.

For many people who lived in Peru during the twentieth century, the U.S. was a land of dreams and opportunity. A land where people were able to start their own business, build their own community and make life more comfortable for their children.

Of course, nowhere is perfect. Immigrants to the U.S. have never had it easy - having to deal with prejudice, isolation and separation from their loved ones - but over the years Peruvians from all walks of life have prospered in Florida, New York, New Jersey, California and many other states.

The History of Peruvian Immigration to the United States

According to the most recent U.S. census around 679,000 Hispanics of Peruvian origin live in the U.S. today. Over a hundred years ago the first Peruvians started arriving in the US. Unfortunately, there isn’t much documentation about this early period of Peruvian immigration. However, it is known that the California gold rush was a big reason for the influx of the first families from Peru.

In the following years Peruvian immigrants started to settle in other areas of the U.S. In particular, people from Peru started working in textile mills in Paterson, New Jersey which is today home to one of the most significant Peruvian communities in the U.S.

Over the years Peruvian communities grew larger and became ingrained within the towns, cities and states across America. Today, Peruvians are the 11th-largest population of Hispanic origin living in the U.S. Since the turn of the century there has been significant growth as first and second generation immigrants expand their families and more Peruvians have become enticed by life in the states. In 2000 there were around 193,000 foreign-born Peruvians in the U.S. and today there are over 420,000.

In places like New Jersey and Florida, in particular, Peruvian immigrants mixed with communities of other Hispanic immigrants like Dominicans and Colombians. This resulted in a unique melting pot of cultures and influences that has transformed places in New Jersey, Florida and other states into what they are today.

How do I become a U.S. resident from Peru?

Peruvian immigration to the U.S. has grown in recent years. People from all over Peru have left their home nation to pursue a new and exciting life in the land of dreams and opportunities. Many of these Peruvians will have become U.S. residents and over the years have begun to call the United States home. So how do you become a U.S. resident?

There are a variety of ways to become a U.S. resident including marriage to a U.S. citizen, a petition from an employer, sponsorship by a close relative who is a U.S. citizen or legal permanent resident, or via the U.S. Department of State diversity lottery program. The process can be long, complicated and frustrating but many Peruvians who live in the U.S. today will say it was all worth it in the end.

Now you know a little bit more about Peruvian immigration and the Peruvian diaspora in the U.S. you might be wondering how you can support your loved ones in Peru. Thankfully, Small World is here to help.

Small World is an international money transfer service helping millions transfer money to family, friends and businesses around the world every day. We offer a variety of secure, quick and easy transfer services to hundreds of countries.

If you need to send money to Peru you can do so with Small World via our simple and secure bank deposit service. Our local bank partners in Peru include Interbank, Argenper, Jet Peru and more. So if you need to support your loved ones overseas, choose Small World!