Why is the US the Land of Dreams and Opportunities? 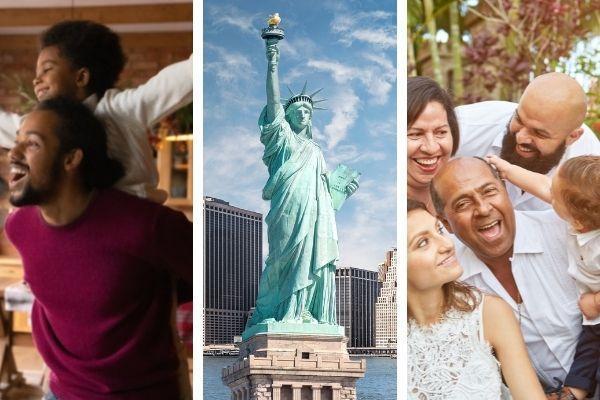 The ‘American Dream’ is a phrase known around the world. The American dream is about Miami beaches and Hollywood’s cinema, Texas food and New Orleans’ music, California’s coastline and Chicago’s skyline.

But it is more than a collection of words. It is an ambition. It’s the drive to improve your life. It is about being optimistic and having a determined spirit. Today that spirit is continually tested and yet the US still maintains the reputation of a country where the unlikely can eventually succeed. Why is this idea so strong? Is America still the land of dreams and opportunities? Is the American dream possible for immigrants?

Let’s have a look at the reasons why the American dream is still alive.

The notion of the American dream is rooted in the Declaration of Independence. If all men are created equal with the right to life, liberty and the pursuit of happiness then America is the nation for dreamers and optimists. There was a clear ambition that citizens of the United States could point to everytime they tried to achieve something.

For many citizens, including women and people of color, the dream was not enshrined in the same way. It has taken years of struggle and courage from the disadvantaged to be able to have the same dreams and the same opportunities as the rest of the U.S. And, obviously, the situation is not perfect, even now after years of amendments, civil rights movements and leaps of progress. But every generation gets closer.

What was the American dream for early immigrants? Many moved to the United States in search of a better life. They moved to the U.S. because of the promise of opportunity. The U.S. is a nation of immigrants from all over the world. Its lofty ambitions attracted hardy and resilient folk.

Early immigrants hoped for a new land they could call home. And for years they have been building that land themselves in Indiana, Iowa, Arizona and every other state across the nation.

What are the differences when it comes to the pursuit of the American dream between immigrants and citizens? The inspiring stories of these famous immigrants show that anyone has a chance to make it in the United States.

Born in Nigeria, Chimamanda Ngozie Adichie moved to the United States when she was 19 to study at university. She has since gone on to become one of the country’s best known writers.

Her novel Americanah documents the experience of being an immigrant in the United States. She is also a leading feminist writer and has recently published a book titled Dear Ijeawele, or A Feminist Manifesto in Fifteen Suggestions.

MLB MVP winner Miguel Cabrera was born in Venezuela in 1983. Sixteen years later he was signed by the Florida Marlins and spent time in the minor leagues before winning the World Series in his rookie season in 2003.

During his career, Cabrera has won four AL batting titles, including three in consecutive seasons (2011–2013). He is among a group of Venezuelan immigrants who have brought their talent to the MLB to thrill and entertain baseball fans in the United States.

Visionary film director Guillermo Del Toro was born in Guadalajara, Jalisco, Mexico in 1964. He cut his teeth as a budding filmmaker at the University of Guadalajara. His unique style and his passion for horror and innovative storytelling has made him one of the best loved filmmakers working today. His films include Pan’s Labyrinth, Hellboy, Pacific Rim and The Shape of Water, for which he won an Oscar for Best Director in 2017.

Broadway star Joan Almedilla was born and raised in the Philippines and moved to the United States in 1993. She dreamed of being a singer in the U.S. and soon gained recognition on Broadway in productions of Miss Saigon and Les Miserables.

Almedilla is the first Filipino to play the role of Fantine in Les Miserables. She has also directed a number of fundraisers that have helped raise money for victims of tsunami disasters in South Asia. Her talent and goodwill is indicative of what immigrants bring to the United States.

The Dominican fashion designer Oscar de la Renta became world famous during the 1960s because he was one of the couturiers who dressed Jacqueline Kennedy. He died in Connecticut in 2014 but his name and brand has lived on to become synonymous with high fashion and luxurious bridal wear. He held both US and Dominican citizenship and his work earned him an international reputation for fashion excellence.

So is the American dream possible for immigrants? Yes, but it isn't easy. And here at Small World we want to make it simpler for you and your family to succeed.

A Land of Dreams and Opportunity

The United States is still a land of dreams and opportunity. And Small World is expanding business across the U.S. for that very reason. We’re inspired by the stories of immigrants making their dreams come true in the United States.

We are a money transfer service that helps you send money across state and country borders to your friends and loved ones. And we’re excited about our plans to expand in the US. Whether you're in New York, California, Texas or Florida or any other state, Small World is here to help you fulfill your own American dream. Our easy and secure money transfer service will let you get your money where it needs to be, to support your family and loved ones back at home.