Guide to Voting as an Immigrant in the USA 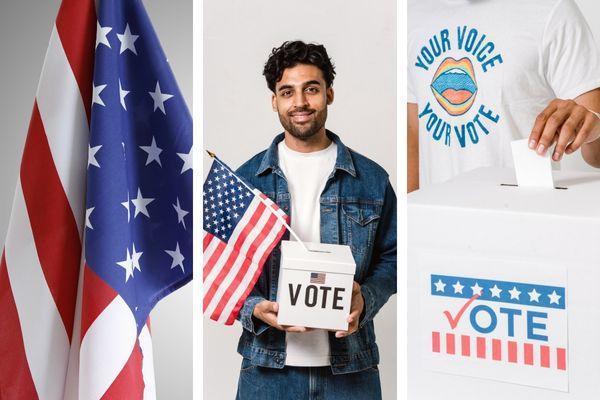 The U.S. democratic system is dependent on thousands of elections every year. From presidential elections to midterms all the way down to council seat races, elections are crucial to the continuing development and stability of the country.

While you are not required by law to vote in any election it is considered by many in the U.S. to be an important civic duty. For some immigrants it may take some time to get used to the election process in the U.S.. It is normal to have lots of questions. Where can you vote? Which elections are the most important? How can you cast your vote? Can you vote from abroad? When should you be voting?

Below we will be discussing a number of topics to do voting as an immigrant in the U.S., including:

Before we start discussing how, when and where you would vote as an immigrant in the U.S., it’s first worth having a look at the types of elections that take place. Ultimately, there are four overarching categories of elections in the U.S. These include:

A primary is the first stage of many major elections in the U.S. during which voters indicate their preference for an individual to represent their chosen political party. The winner of the primary will then run in a general election against the winner of the other party's primary elections.

Local elections are when voters elect local council members, judges, mayors, advocates, or some other local official. Within a state there will be many regions each with their own local elections. To learn more about your state and local elections click here and head over to the official election information website of the U.S. government

These are the rarest kind of elections that only take place when an unexpected event occurs. For example, if someone dies, resigns or is in some other way removed from office a special election will take place to elect a replacement.

To vote in a U.S. federal, state or local election you must:

Non-citizens, including permanent legal residents cannot vote in federal and state elections. However, non-citizens are allowed to vote in some local elections, depending on where you live. You can check with your local election office to see whether you can vote in your next local election.

For more information about who can and who can’t vote, visit USA.gov.

You can register to vote online or by mail. Registering to vote involves putting your name on a list of voters. This list is based on where you live therefore if you move you will have to register again with your new address.

Registering is quite simple. All you have to do is fill out a form with personal information and do so by the particular election deadline. Today this whole process can be completed quite easily online.

Deciding who to vote for

Part of fulfilling your civic duty and voting elections should involve learning as much as you can about the candidates standing in the elections as well as the issues that are relevant at the time of the elections. There are a few key things to help you decide who you want to vote for, including:

Where you can vote

You can cast your ballot at a polling station or a polling location. Often polling stations are housed in public facilities such as town halls, sports halls, churches or schools. You can find your local polling place here. Depending on the state in which you live you can also vote at a vote center.

If you are unable to vote in person you can ask for an absentee ballot/mail-in ballot. All you have to do is fill out your ballot and mail it. Some states will ask you to give a reason why you can’t vote in person e.g. you’re overseas, disabled or a senior citizen.

How you can vote in person

So, you’ve done all your research and decided who you want to vote for. But, what do you do when you get to the polling station? Thankfully, this process should also be simple.

How to send money from the U.S.

Learning about the U.S. voting system is a great way to ensure that you are taking part in your community in the U.S. and fulfilling your civic duty. As an immigrant living in the U.S., as well as voting, you may also be thinking about what you can do for your loved ones back home. If you live in the U.S. and you want to start supporting your loved ones living abroad, Small World can help.

Small World is an international money transfer service that helps millions around the world send money to their loved ones. There are a number of transfer services you can use if you are based in the United States and you want to support your loved ones abroad, including bank deposit and cash pickup.

Send Money from the USA