How to prepare for the U.S. citizenship test 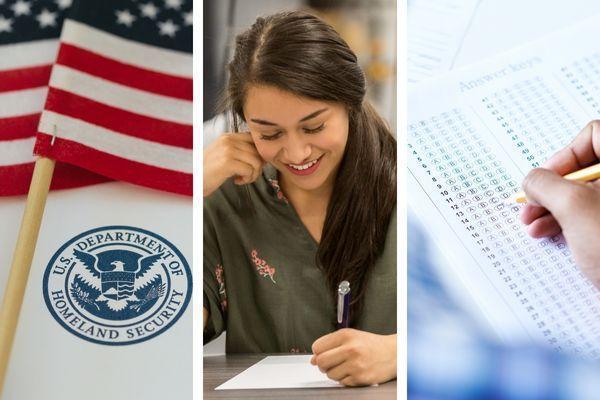 Who is the current President of the United States? What are the three branches of the U.S. government? How many stars on the U.S. flag and what do they represent? How has the Constitution changed? If you know the answers to any of these questions, you may be able to pass the U.S. citizenship test. But wait, there’s more to it than that!

In this blog we’ll be exploring everything you need to know about how to prepare for the U.S. citizenship test, including:

What is the naturalization and citizenship process in the U.S.?

The citizenship test is exactly what it sounds like. It is a test to see whether you can become a citizen of a country. In the U.S. the process of becoming a citizen involves a naturalization interview and naturalization test.

The naturalization test consists of two components: an English test and a civics Test. The English test is a test of your understanding of the English language including your ability to read, write and speak English. The civics test is what most people think of when they hear the phrase ‘Citizenship Test’. It is a test consisting of questions about American government, history and life. We’ll be discussing this part in more detail below.

To learn more about the exact form and function of the naturalization interview and citizenship test click here to visit the official website of the U.S. Citizenship and Immigration Services.

When should you take the citizenship test?

If you are a permanent resident who has been in the U.S. for at least 5 years then you are capable of applying for U.S. citizenship. Ofcourse, it is a personal choice. Some people will want to retain their original home country citizenship and others will be jumping to become a U.S. citizen as soon as possible.

Those who do decide to become a U.S. citizen will then need to take a series of steps to obtain their citizenship. Usually the steps will be:

Are you eligible to take the citizenship test?

To take the citizenship test you must be a non-U.S. national who is lawfully permitted to reside in the United States. As well as this basic requirement you must also:

What is in the citizenship test?

The citizenship test is an exam that tests your English language skills and your knowledge of U.S. history and government.

The English language section is comprised of 3 parts:

The civics section will consist of a number of questions about U.S. history and the U.S. system of government. It is not multiple choice but as long as you study for a bit and have immersed yourself in American life in the past five years, this section should not be too difficult to pass.

The kinds of questions you can expect to be asked, include:

Before 2020 the civics test was slightly different to what it is today. Iin the 2008 version the USCIS officer would ask candidates up to 10 questions from a list of 100 civics test questions. You had to answer 6 questions correctly in order to pass. Today there are more questions.

How to send money to the U.S.

Learning about how to build and manage your credit score in the U.S. should hopefully help you support family and friends based in the U.S. If you want to start supporting your loved ones in the U.S. as soon as possible then you may want to send them some money. This is where Small World can help.

Small World is an international money transfer service that helps millions around the world send money to their loved ones. There are a number of transfer services you can make use of if you want to support your family and friends in the United States, including cash pickup and bank deposit.