Where Are Togolese Immigrants Based in the US? 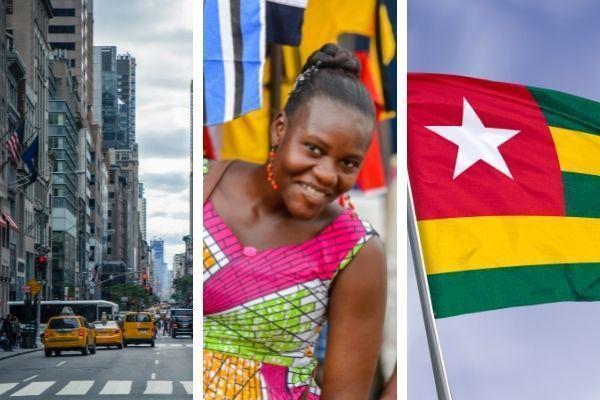 Togo is a small country on the western coast of Africa. Sandwiched between Ghana, Benin and Burkina Faso, Togo has been an independent country since 1960. Many Togolese people have also settled in other countries around the world. One of the most popular countries to live in for Togolese immigrants is the United States of America.

“Once considered a low migratory culture, Togo, for the last twenty years, has seen a rapid growth of the number of its citizens living abroad.”(CADTM) As more and more Togolese people venture overseas it is interesting to learn about where they’ve decided to settle.

In this blog, we’ll explore all you need to know about Togolese immigration to the US and the US cities in which strong Togolese communities have emerged.

What is the history of Togo?

Togo is home to a widely diverse population with many languages, religions and cultures present in towns and cities across the country. Togo became an independent republic in 1956 but back then it was known by a different name: French Togoland.

The following years were difficult for Togo with a number of conflicts and coups. However, the situation have improved in recent years as the Togolese economy has grown in strength and electoral reforms have taken place.

Togo has strong bilateral relations with the United States with Togo being a pro-western and market-oriented country. The United States has encouraged and stimulated greater economic development within Togo and helped to run local business programs.

To learn more about Togo check out our recent article, ‘Curious facts about Togo’.

Historically, the Togolese people have not been particularly migratory. For many years, compared to other African nations their overseas population was relatively small. However, this has changed quite dramatically in the last twenty years.

For example, “the 2010 census estimated the population residing in Togo at 5,753,324. According to various sources, between 1.5 million and 2 million Togolese [people] now reside abroad. This figure, if confirmed by the next census... would make the Diaspora the first “region” of Togo, as it would represent over 25% of the population living in Togo.”(CadTM)

Togo has had regular and frequent immigration with neighbouring West African nations such as Ghana. “There is a steady migration of laborers from rural to urban areas. Members of the Ewe group migrate to and from Ghana. Formerly, an estimated 100,000 workers went to Ghana from Togo each year, but because of Ghana's declining economy, this number has probably decreased.” (Nationsencyclopedia)

Recent history shows that Togolese emigration to the United States has come in three waves:

Many Togolese citizens, perhaps like yourself, are looking for opportunities abroad in other African nations, European countries like France, Germany and Great Britain, and across the Atlantic Ocean to the United States.

Let’s take a look at where the majority of Togolese immigrants are settling in the United States and how strong Togolese communities have formed in major American cities like Chicago and New York.

Togolese in the US

According to the most recent US census  and American Community Surveys there are around 16,000 Togolese-born individuals living in the United States.

There is a well documented history of Togolese immigration to Chicago, Illinois. “Togolese immigrants are among Chicago's most recent arrivals. From a few scattered members in the 1970s, the Togolese community in Chicago grew rapidly in the 1980s, when closer ties between the United States and Togo, along with the emergence of a free-trade zone, made mastery of the English language and an American education more valuable….By the late 1990s, approximately 300 Togolese lived in the city and 500 in Illinois” (ChicagoHistory)

Compared to other West African nations the Togolese community in the United States is still relatively small. However, in Chicago there are strong local communities. “The Togolese community settled mostly on the city's North Side, in Uptown, Lakeview, and Edgewater. The fruit markets and stores in these neighborhoods began carrying extensive African foods and publications, all of which attested to the cumulative buying power of a growing African community in Chicago.”(ChicagoHistory)

Other than Chicago, New York is the city many Togolese immigrants to the United States have decided to call home. New York is one of the most popular cities in the world for immigrants and along with Los Angeles represents the idea of the American dream.

New York is home to LiftTogo and the American Togolese community (AMETOCO). “LiftTogo is an association with a twofold mission: First, to raise awareness and provide assistance to the underserved children living in Togo and other parts of Africa; Second, to provide advice and resources for students from Togo who have immigrated to the U.S.” (NewYorkinFrench)

As more Togolese communities continue to emerge in cities like Chicago and New York, it is likely that more and more Togolese immigrants will make the journey to the US to start a new life.

How can I send money to Togo from the US?

If you have Togolese family and friends based abroad or in Togo you may want to know about how you can support them financially. The easiest and safest way to send money overseas is with Small World.

Small World has facilitated millions of money transfers all around the world. So if you need to support your loved ones in Togo or the United States you can rely on Small World.