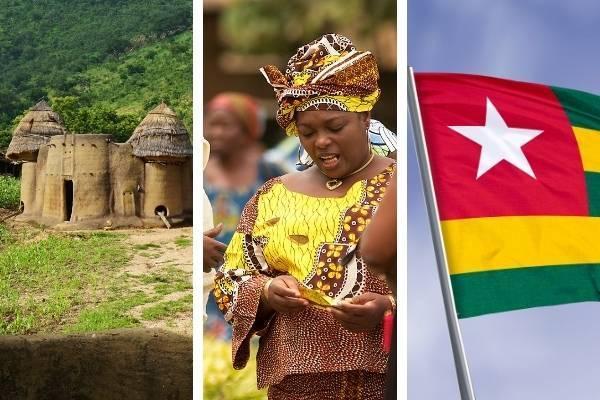 Despite being one of the smallest countries in Africa, Togo manages to be one of the most interesting nations on the continent. Located in West Africa on the Gulf of Guinea, Togo (officially the Togolese Republic) is a country packed full of fascinating people, wonderful sights and a thriving culture.

Togo is bordered to the west by Ghana, to the east by Benin and to the north by Burkina Faso. Sandwiched between these countries, Togo’s narrow sliver of land is home to a wide variety of languages, a complex religious history and delicious food.

In this blog, we’ll explore some of the most interesting facts about Togo and try to understand what makes the country so special.

What language is spoken in Togo?

While Ewe and Kabiyé have both become nationalized languages, others like the Mina, Tem, Gbe, Gen, Kwa and Yoruboid languages are also used throughout the country and also preserve the rich cultural history of the regions across Togo.

What is the capital of Togo?

The capital of Togo is the city of Lomé. It has been the centre of commerce, administration and transportation in the country for over a century despite being located in the extreme southwestern corner of the country.

To the north of Lomé is a great lagoon and to the south is the Atlantic Ocean. One of the main attractions in the city is the Togo National Museum which contains historical collections of craftwork, jewelry, musical instruments and weapons.

What time is it in Togo?

Togo observes Greenwich Mean Time all year round. Unlike many other countries, Togo does not conduct any Daylight Saving Time clock changes. Togo and the neighboring countries of Burkina Faso and Ghana observe GMT. However, Togo’s other neighbor, Benin, observes West Africa Standard Time which is GMT+1.

Koutammakou, the Land of the Batammariba has been designated a UNESCO World Heritage site. The region, which extends in Benin, is home to the Batammariba. The Batammariba people have built remarkable mud tower-houses (Takienta) for many years and the structures have come to be seen as a symbol of Togo around the world. The region possesses a strong connection to the history of Togo and is a tremendous example of the rich cultural identity that runs throughout Togo.

In Lomé, at the Akodessewa Fetish Market you can find one of the most fascinating examples of voodoo culture in the world. The market sells everything from ingredients to talismans to intricate carvings that are used in a variety of voodoo medicines and ceremonies.

Voodoo has its origins in West Africa and is still one of the most popular religions in Togo. At the market you can witness healers working and a diverse range of singing and dancing. The foundation of the voodoo market is the knowledge that has been passed down through generations of Togolese people.

The colorful flag of Togo features five equal strips of alternating green and yellow with a white five-pointed star set in a red square in the top left corner.

If you are sending money to Togo or thinking about travelling there, it helps to know about the currency and its exchange rates.

The Togolese currency is the West African CFA franc. The CFA is the currency of more than seven other African nations including Benin, Burkina Faso, Guinea-Bissau, Ivory Coast, Mali, Niger and Senegal. Its extensive use across nations make it one of the more stable currencies on the continent.

The CFA was introduced in 1945 and replaced the French West African franc. The internationally recognized code for the West African CFA franc is XOF. The currency was initially pegged to the French franc so that 1 FRF = 100 XOF.

Let’s take a look at the exchange rate of the CFA to some of the major world currencies.

As you can see, at the moment the currency of the United States goes a long way in Togo. Five years ago the average exchange rate between the two countries was around the same value (1 USD = 595.56 XOF). The relative change between the countries has been gradual over the years.

Togo is a wonderful country, full of fascinating people and things to see.You may have family and friends in Togo who you want to support. This is where Small World can help.

Small World is an international money transfer service. We offer you two services to transfer money to Togo: bank deposit and anywhere pickup. Whichever option you choose will allow you to transfer money quickly and conveniently so you can support your family or friends in Togo.

Your first transfer online to Togo is always fee-free!