What’s the Currency of Pakistan? 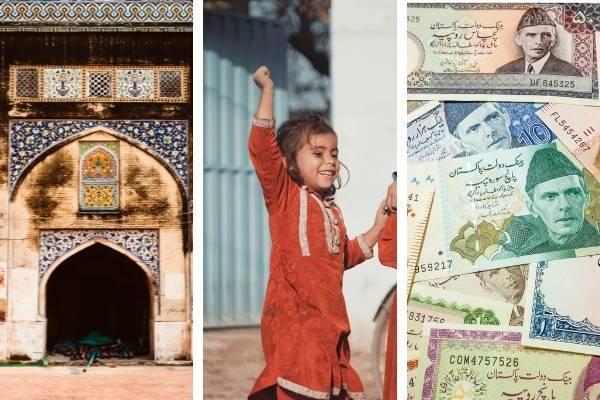 Are you thinking about sending money to Pakistan? If so, you may be wondering about the history of the currency of Pakistan. What are the currency denominations? How strong is it?

The evolution of Pakistan’s currency is an interesting topic including Pakistan's political and economic history. Over the last eighty years there have been a lot of currency developments in Pakistan.

In this blog, we’ll explore the fascinating history of the Pakistani rupee, it’s exchange rates with some of the major currencies and how you can send money to Pakistan.

The currency of Pakistan

The currency of Pakistan is the Pakistani rupee. The currency has been vital for the country's economic growth in the latter half of the twentieth century and in particular in the last twenty years.

The currency is controlled and managed by the State Bank of Pakistan, the central financial institution in the country. The Pakistan currency name, the rupee, is the same as the name for the Indian currency. The word Rupee is derived from the ancient Sanskrit word “rup” or “rupa”, which means silver in many Indo-Aryan dialects. Now you know what the currency of Pakistan is, it’s time to dig a little deeper.

How is the Pakistani rupee recognised?

In fact the Pakistani rupee “has emerged as the world’s best-performing currency as it appreciated the most against the US dollar” in the early months of 2021. So, let’s take a look at how the Pakistani rupee has developed to become what it is today.

The history of the Pakistani rupee

The Pakistani rupee originated in 1947 when Pakistan gained independence from the British Empire. The newly independent nation of Pakistan did not have the infrastructure in place to immediately establish a central banking system. That is why in the first year of Pakistan’s independence, Pakistan used the British Indian Rupee which was stamped with the words ‘Government of Pakistan’.

The depictions on the rupee notes are also quite interesting and highlight some of Pakistan’s stand-out national features. On the Green Rs.10 note, the depiction on the back is of the Bab-e-Khyber, the entrance of the famous Khyber Pass.

On the Rs. 50 note the depiction on the back is of K2, the second highest mountain in the world. On the dark green Rs. 500 you can see the Badshahi Masjid in Lahore. And on the yellow Rs. 5000 note you can see Faisal Masjid in Islamabad. Each depiction is a celebration of Pakistan’s history.

The complete history of Pakistan’s currency is quite complex. Let’s turn to exchange rates.

The Pakistani rupee has been relatively strong in recent years. In 2021 the average exchange rate of the British Pound to the Pakistani Rupee was 217 PKR to 1 GBP.

It also helps to look at the Pakistan currency to the Dollar and to the Euro. As such, the average exchange rate of the Pakistani rupee to the US Dollar in 2020 was 1 USD to 161 PKR, with the rupee fluctuating slightly between the low 160s and high 150s.

Similarly, the exchange rate of the Pakistani rupee to the Euro on average throughout 2021 is 1 EUR to 187 PKR. These exchange rates with some of the major currencies show how the Pakistani economy has coped during the difficult times brought on by the pandemic.

The overall economic outlook of Pakistan has been positive in recent years. The economy has been growing slowly in the last two decades and there is a rising technological sector. However, in the last couple years the country has experienced an economic slump.

Agriculture was the largest sector at the time of independence and the introduction of the Pakistani rupee. Now the economy is far more diverse and there is a potential for a strong economy to emerge out of the chaos of the pandemic.

How do I send money to Pakistan?

If you have family, friends or business partners in Pakistan you may need to send money there, we can help.

With Small World, you can transfer funds to Pakistan via cash pickup, bank deposit or airtime top-up and send money for collection at over 8,020 locations across Pakistan. Our services ensure you can send money quickly and securely to your loved ones in Pakistan.