What is the currency of The Gambia? 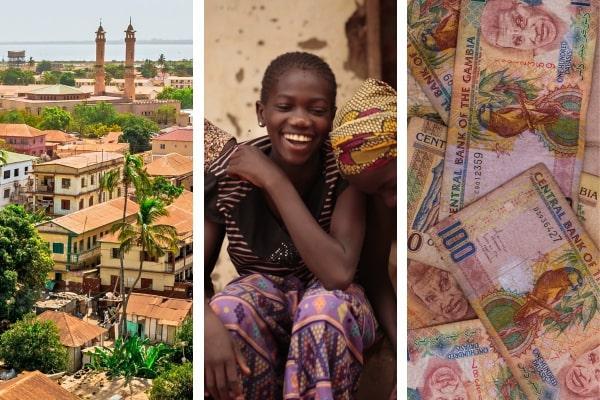 The Gambian currency is called the Dalasi. The colourful notes depicting Gambian animals and famous individuals from Gambia's history have been around since the 1970s. Throughout the twentieth century the medium of exchange in The Gambia has steadily evolved. And the Dalasi itself has had an interesting history in the last fifty years.

If you want to send money internationally it helps to know a bit about the different currencies around the world. And here at Small World we have over a decade of experience facilitating international transactions from countries like the United States and the United Kingdom to The Gambia.

In this blog we’ll explore the evolution of the currency of The Gambia, give a brief overview of the currency and mention some of the key exchange rates you may want to pay attention to.

What is the currency of the Gambia?

In 1971 the people of The Gambia adopted the Dalasi (D) as their official national currency. It replaced The Gambian pound which had been the currency since The Gambia had been granted internal self-governance in 1963. The Dalasi is subdivided in 100 bututs, with coins in denominations of 1, 5, 10, 25, and 50 bututs. The Dalasi is only used in The Gambia.

The coins are struck in bronze and cupro-nickel and bear the national coat of arms. However, since 2019 bututs coins have largely disappeared because of their low value. So when you are travelling around The Gambia you’re less likely to see these nice shiny coins at shops and restaurants. But don’t worry, as long as you know about the Dalasi,you will be fine.!

In 2019 the Central Bank of The Gambia issues some new dalasi banknotes. All bear the coat of arms and on the reverse side there are a variety of depictions related to the Gambian culture and the country’s history. On the red coloured 5 dalasis there is an image of cattle, on the green 10 dalasis there is a ferry, on the blue 20 Dalasis is an agricultural machine. Agriculture is one of the main drivers of the Gambian economy which is why so much attention is paid to agricultural images and symbols on the Dalasi notes.

On the purple 50 Dalasis is a depiction of the Wassu stone circles. This image pays homage to the Senegambian stone circles which bridge the border between The Gambia and Senegal. The stones are an historic wonder and are considered to be the largest concentration of stone circles in the world. The 100 Dalasis note bears the image of some fisherman on its reverse side and the yellow 200 Dalasis note depicts individuals planting rice.

The history of the Gambian currency and economy

To understand the history of the Dalasi it helps to know about how the Gambian economy has evolved over the years. The Gambian economy is largely driven by three main sectors: tourism, agriculture and industry. Despite its size, being the smallest country in Africa, and it’s short coastline, The Gambia has been able to punch above its weight in recent years thanks to a growing agricultural industry and increased tourism.

As we mentioned earlier, before the Dalasi The Gambia used the British pound. But even before that French 5 Franc silver piece was also widely used throughout the country. And even before then, back in the 19th century the accepted legal tender in The Gambia was Cowrie Shells. Like many other countries before using coins, shell money was used as the primary medium of exchange.

Agriculture accounts for approximately 30% of gross domestic product (GDP) and employs about 70% of the workforce. In part because of the country’s dependence on agriculture the currency has fluctuated quite substantially over the years. The growing tourism industry, contributing 12% of the country's GDP, has gone some way to stabilising the economy which in turn has helped to boost the value of the Dalasi somewhat.

Speaking of the value of the Dalasi, let's take a look at the exchange of The Gambian currency and how it compares to major currencies around the world.

The exchange rate of the Gambian Dalasi gives you a good idea of the health of the economy and the general usefulness of the currency. First, let's compare the Gambia currency to USD.

“The GMD is issued by the Bank of the Gambia and floats freely against other world currencies.”

In 2021, the average exchange of the British Pound (GBP) to The Gambian Dalasi (GMD) is around 71 GMD to 1 GBP. Sitting between the exchange rates of the US dollar to the British pound is the Euro. In 2021, the average exchange rate of the Euro to the Dalasi is 62 GMD to 1 EUR. Now you should have a good idea how The Gambia Dalasi compares to some of the major currencies around the world. It is definitely something worth keeping in mind when you are sending money to and from The Gambia.

Whether you need to transfer money from the UK to The Gambia to support your family back home or you have to pay an overseas supplier you can use Small World to facilitate the transfer. You can send money to The Gambia via bank deposit, and we have partnered with many of the top banks in The Gambia to ensure you are getting the best experience.

For over a decade we have been helping people support their loved ones back home with our seamless global money transfer service. If you need to send money, choose Small World!

Transfer money to the Gambia