What is Albanian Flag Day? 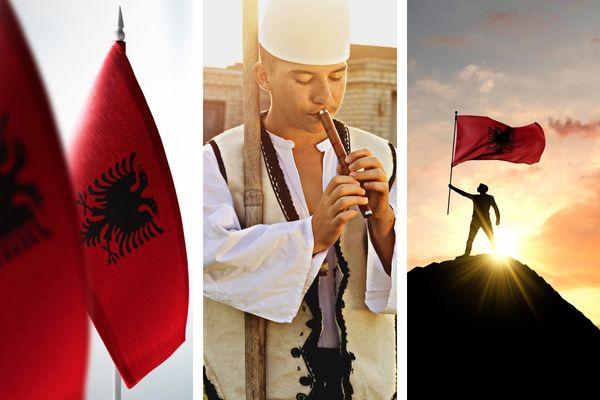 Albanian Independence Day, also known as Flag Day, is a significant day in the calendars of Albanian people around the world every year. It is an opportunity for Albanians to get together and celebrate. It is also a chance for Albanians and people of the Albanian diaspora around the world to remember their shared history and commemorate those who fought for independence over the years.

When is Albanian Flag Day?

Independence Day or Flag Day is celebrated on the 28th of November every year. It is a public holiday in Albanian, North Macedonia and Kosovo and is celebrated throughout the Albanian diaspora around the world. The day is marked with ceremonies, events and flag flying across the country. It is a non-working day observed in Albania. Among communities of Albanian immigrants it is a chance to reconnect with their heritage and celebrate with loved ones.

What does the Albanian Flag represent?

The Albanian flag is a red flag. In the centre there is a silhouetted black double-headed eagle. Traditionally, the red of the flag represents the strength, valour, bravery of the Albanian people as well as the blood they have shed over the years to protect their country.

This flag was first adopted 579 years ago in 1443 before a more general scheme was agreed in 1912. In 1946 a star was added to the flag before being removed in 1992. In 2002 the design of the flag was standardised. The red field with a black two-headed eagle continues to represent the nation of Albania to this day.

Why is Albanian Flag Day celebrated?

Albanian Flag Day marks the day Albania declared independence from the Ottoman Empire back in 1912. The occasion refers to the day the Albanian flag was raised in Vlora. The 28th of November also refers to the day on which Skanderbeg, legendary Lord of Albania and military commander, led a successful rebellion against the Ottoman Empire and raised the Albanian flag in Krujë on the 28th November 1443.

How do Albanians Celebrate Independence Day?

So, now you know a bit about the politics and history of Flag Day in Albania, what about the actual celebrations?

Some of the key Independence Day traditions in Albania include flag flying, military parades, traditional music, and cultural events. Here are a few of the ways Albanian citizens and those of the Albanian diaspora mark the day:

One of the most important Flag Day traditions is the festive parade in Tirana, the capital and largest city of Albania. The streets are lined with stalls and flags fly from every balcony as the whole city marks the occasion in style. Other cities like Berat, Gjirokaster, Vlora and Durrës also have their own festive flag day parades.

Thousands flood the centre of Tirana to enjoy the parade but also to enjoy the concerts in the evening. Often there are musical performances by famous Albanian musicians as well as international stars like Emile Sandé. Indeed, November 29, the day following Flag Day, is known as White Night and is about bringing art and culture to more Albanian people. Museums, theatres, cinemas and galleries will be free for the day and invite people to join and enjoy their art.

National holidays are a great opportunity for Albanian families to get together and celebrate. For many it is a tradition on the 28th November to head to your family member’s house, bring some food and drink, and watch the festive parade on the television. Despite the cold weather in November, as the night continues families and friends will head out to join other families and friends in their communities.

If you’re thinking about travelling to Albania for Flag Day you should be aware that your experience is likely to be affected by the celebrations. It is a national holiday therefore many shops and public services will be closed. If you are in Tirana in particular there will probably be road closures, travel disruption, and delays on public transportation. While it will be a particularly busy time, it will also be an opportunity for you to experience some authentic Albanian culture.

What is the best way to send money to Albania?

Small World is a leading money transfer service created to help you and millions of others send money internationally. If you want to support your family and friends so they can celebrate Albania’s Independence Day, then Small World has got you covered.

Our money transfer services to Albania include Cash Pickup and Bank Deposit. With this service you can securely and quickly send money overseas without any hassle.

Our local bank partners in Albania include Raiffeisen Bank, BKT, Alpha Bank, Tirana Bank, UnionBank, Raea Financial Services and many more. Connections like these all around the world have helped us deliver a speedy and reliable money transfer service to millions. If you want to help your loved ones celebrate Albanian flag day this year you can rely on Small World.