The Best Songs About Money 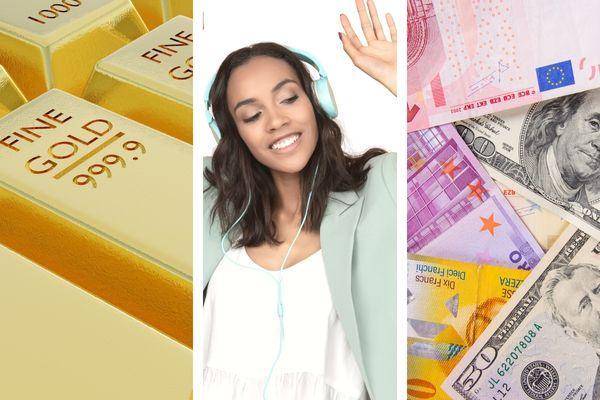 Like heartbreak, young love and the discontent of youth, money is one of those eternal themes that musicians seem to turn to again and again. There have been thousands of songs written about money demonstrating a wide array of attitudes and imagination.

Some of the world’s most beloved musical artists like ABBA, AC/DC, Madonna and The Notorious B.I.G all had hit singles with their own songs about money. Below we list and explore some of the best songs about money, ranging from rap to cabaret and pop to rock.

The Swedish supergroup have had many hits over their long career spanning from the 1970s to the 2020s but perhaps none is as relatable as Money, Money, Money. Released in 1976, this pop classic is definitely one of the first songs that comes to mind when talk turns to money-themed songs. It’s catchy, musically exciting and instantly recognisable.

Fan of Cabaret or Liza Minelli? Then you’ve probably heard this charming tune from the musical Cabaret. Even if you’ve never seen the film you’re probably familiar with the lyrics: “Money makes the world go around. The world go around”. The song describes the supposed power of money in the world and the consequences that come from a lack of money. “Get a little, get a little. Money money money money. Mark, a yen, a buck or a pound. That clinking, clanking, clunking sound. Is all that makes the world go 'round”

Apparently the 1970s was a great decade for songs with money in the title. And Pink Floyd’s fantastic Money from their legendary album, ‘The Dark Side of the Moon’ is another iconic song about the perils and prizes that money can bring. “Money, so they say, is the root of all evil today. But if you ask for a rise, it’s no surprise that they’re giving none away.”

Recorded by Madonna for her second studio album Like a Virgin and written by Peter Brown and Robert Rans, Material Girl is a provocative and ironic take on the worth of money. It’s about people who are ambitious, attracted to the shiny, expensive things that money can buy and feel the need to show other people their wealth. It’s still a hit in clubs today which is testament to the enduring nature of the production by Nile Rodgers and the iconic singing by Madonna.

C.R.E.A.M stands for Cash Rules Everything Around Me. The legendary hip hop group Wu-Tang Clan released C.R.E.A.M. on their classic debut studio album Enter the Wu-Tang (36 Chambers). The song features verses from Raekwon and Inspectah Deck, as they rhyme about their upbringings in New York and the way in which money has influenced their lives and the lives of those around them. The song was produced by RZA and the iconic chorus riff ‘Cash Rules Everything Around Me’ is sung by Method Man.

Undeniably the funkiest song on the list, Money by YouTube musician and virtuosic drummer Louis Cole is a modern day surreal funk statement about how you shouldn’t let money mess you up. With potent slap bass, a killer drum beat and hypnotic vocals, Money by Louis Cole, while probably the least known song on this list, is definitely one of the best songs about art triumphing over money.

One of AC/DC’s biggest hits, Moneytalks is a hardcore rock anthem raging about the excesses that money can buy. “Tailored suits, chauffeured cars. Fine hotels and big cigars. Up for grabs, up for a price”. As with many of the songs on the list, the lyrics are about what you can do with money and what the pursuit of money does to your soul.

Mo Money Mo Problems by The Notorious B.I.G also known as Biggie Smalls, or simply Biggie, is all about how you have more to worry about the more money you have. “I don't know what they want from me. It's like the more money we come across the more we see.” The flow is effortlessly smooth and the beat is super funky. Now, over 25 years old it’s still a tune you’ll hear people dancing to at parties or blasting out of headphones.

An oldie but a goldie. This tune has been a mainstay on the radio for nearly 60 years and continues to entertain millions around the world today. Written by Paul McCartney, “Can’t Buy Me Love” topped singles charts in the United States, United Kingdom, Australia, New Zealand, Sweden and Ireland.

The message of the song is quite clear from the title. McCartney said of the song, “The idea behind it was that all these material possessions are all very well, but they won't buy me what I really want.” He later remarked "It should have been 'Can Buy Me Love'" because of all the fame and money the song had brought him and The Beatles.

If you’ve used TikTok during the last couple years you may have noticed this classic Destiny’s Child hit making a resurgent comeback. Recorded in 1998 by the popular girl group Destiny’s Child, the song features Beyoncé, Kelly Rowland, LeToya Luckett and Kandi, with further songwriting credits going to Kevin Briggs.

It is a playful song about a man becoming more and more financially dependent on his girlfriend. As the bills rise and rise he asks his girlfriend to pay them and she’s fed up. It’s a great song with catchy lyrics, melodic vocal runs and classic 90s R&B harmonies.

How to send money with Small World

So, you’re interested in money? What about sending money internationally to your family or friends? If you need to transfer money easily overseas, Small World is here for you.

Small World is an international money transfer service that helps millions around the world send money to their loved ones. There are a variety of transfer services you can make use of if you want to support your family and friends including bank deposit, mobile wallet, home delivery and cash pickup. With our partnerships and secure services you couldn’t be in a better position to send money around the world.