How is Father’s Day celebrated in Thailand? 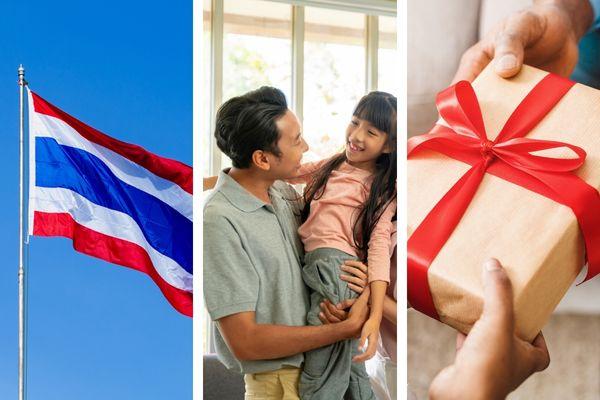 Thailand’s Father’s Day, also known as Wan Por, is an important day for Thai people and businesses. It is a day celebrated throughout the country but, due to Thailand’s unique relationship with their King, their Father’s Day is quite different from many other countries around the world.

When is Wan Por?

Unlike many countries who celebrate Father’s Day in June, Thailand uniquely celebrates their Father’s Day (Wan Por) on the 5th of December. It is celebrated every year on this day because it is the day on which the late King Bhumibol Adulyadej was born in 1927.

In Thailand, the King is seen as the spiritual father of the nation. Therefore, while the day is the celebration of all father’s in Thailand, it is also known as the King Bhumibol Adulyadej Birthday Commemoration Day.

Wan Por is a national holiday in Thailand. It is a chance for the people of Thailand to celebrate Fathers and recognise their contributions to themselves and the nation as a whole.

The day is also celebrated by paying respect to the late King Bhumibol Adulyadej. For many years, nationwide celebrations have taken place to honour the King. Many Thai people would wear yellow (a colour that represents Monday - the day the King was born) and have parties and parades in the streets. Traditionally the King also gives his annual speech on Father’s Day which will be listened to by millions of Thai people in the country and around the world. People will gather and sing a song to wish their King many happy returns. The language used to wish the King happy birthday and a good life is ทรงพระเจริญ – song-prá-jà-rern meaning ‘long live the King‘.

Traditionally, Thai children might pay respect to their fathers and grandfathers by giving them a canna flower or a “dok phutta raksa” (a flower that is similar to a lily). Wan Por is also about families. Across the country, families will be gathering in their homes, eating together, listening to music and paying tributes to Father’s and the late King Bhumibol Adulyadej.

Father’s Day around the world

In Germany the tradition of Father’s Day is connected to Easter celebrations. On the 40th day of Easter, known as Ascension Day, German men will celebrate Father’s Day by organising hikes or gatherings. Plenty of food and alcohol is consumed and the focus is on children spending quality family time with their fathers’.

Mexico celebrates Father’s Day in style with plenty of colourful festivities and street parties. On the third Sunday in June, Mexicans honour their fathers with gifts and get the celebrations started with food and music. Some families also get together to participate in a traditional Father’s Day race in Mexico City called ‘Carrera Día del Padre 21K Bosque de Tlalpan”.

In China there is no official Father’s Day. But while China is missing out, Thai Father’s get to be spoiled by their children and celebrated throughout the country every Wan Por. As you can see Father’s Day is a great occasion in a variety of countries. It is a chance for families to spend some quality time together and an opportunity for fathers to relax.

How can Small World help you celebrating Wan Por

Small World is a leading money transfer service created to help you and millions of others send money internationally. If you want to support your loved ones so they can celebrate Wan Por, then Small World has got you covered.

Our money transfer services to Thailand include Bank Deposit. With these services you can easily, securely and quickly send money internationally without any hassle.

Our local bank partners in Thailand include Bangkok Bank, SCB, DeeMoney and many more. Connections like these all around the world are continually helping us to deliver a safe, quick and reliable money transfer service to millions. If you want to help your loved ones celebrate Wan Por day this year you can rely on Small World.