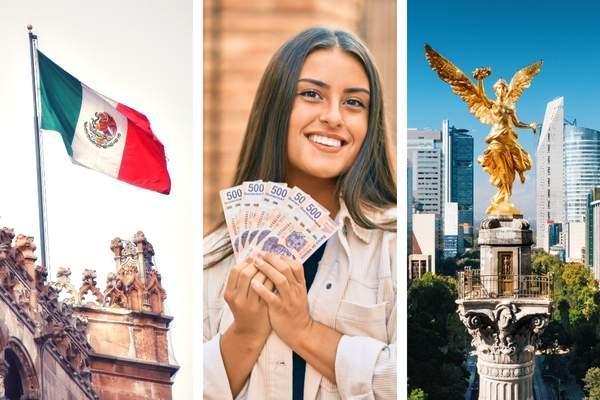 The Mexican Peso is the official currency of Mexico and also the third most popular currency in the Americas, just behind US Dollars and Canadian Dollars. Its roots, like Mexico itself, are traced back to Spain, and it is recognized as the first currency to use design as a method of preventing fraud and counterfeiting.

If you have plans to travel to Mexico or it's your home country, and you want to send money to relatives and friends, then you may want to explore the currency in a little more depth. Below we'll explore:

The currency in Mexico is the Mexican peso. Each peso is equivalent to 100 centavos (or cents). If you're wondering what the Mexican peso symbol is, it's the instantly recognizable sign we already know well for dollars and some other currencies, too - $.

Mexican banknotes vary significantly in color, texture and size to help deter counterfeiting. They all feature hidden watermarks, holographic optical threading to the front of the note and further microprinting that can only be read by a magnifying glass. The larger banknotes in the Pesos denomination are still made of paper, but the smaller notes, such as $50 and $20, are made of plastic polymer.

When you're buying currency to use in Mexico, the currency code to look out for is MXN, but once you're there, all the prices will be in that recognizable $ sign, although the prices will, of course, differ greatly from in the US.

The History of the Mexican Peso

The Spanish word "peso" means weight, and the first pesos were based on the Spanish currency of the time, known as the "real". The peso remains one of the oldest currencies in North America, and it was an official tender in both the USA and Canada until the mid-19th century.

A dark period in Mexican history saw the revaluation of their currency in the 1990s, which saw the value of 1000 pesos changed to one peso and renaming this the "nuevo peso". This new Mexican peso is the one we know today, and its currency code even changed from MXP to MXN. The new peso is the currency we all recognize today, and it has built itself back up from financial disasters at the end of the 20th century.

Peso has become a common term used for different currencies, much like the dollar. Countries including Argentina, Colombia, the Philippines and Cuba also use pesos.

Exchange rates and the close relationship with the US Dollar

For people simply looking to ensure they get the most from their pesos, it is important to regularly check these exchange rates, especially with US dollars. As Mexico and the US sit side by side and the USD is considered one of the world's most important currencies, seeing how the Peso stacks up is a good way of fully appreciating its value in the current market.

When it comes to trading, USD and MXN are one of the most heavily traded currency pairs. This is again because they are neighbours and have historically close ties as trade partners. This special connection between the two states has positively influenced the stability of the Mexican Peso in recent years. You can also find Pesos included in other top-traded pairings, including EUR/MXN and GBP/MXN.

How to send money to Mexico

If you plan to travel around Mexico, it is always recommended to carry some local currency. You can spend USD in some areas of Mexico, but this will not always be the case.

Small World lets you send your money in a range of different ways. Our money transfer services include cash pick-up and also bank deposits. It could not be simpler, and we want to make it easy for you to get your cash to your loved ones without delay.