Where are the Senegalese communities in the US? 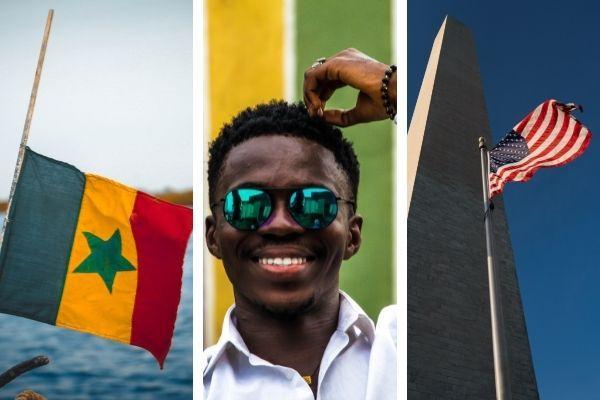 If you are interested in the growth and evolution of Senegalese immigration in the United States these may be some of your most pressing questions. Well, don’t worry because at Small World, we’ve got you covered.

In this blog we’ll be exploring a number of topics to do with the Senegalese-American experience in the United States, including:

The History of Senegalese Immigration to the U.S.

The history of Senegalese movement to the U.S. before the twentieth-century is dark. It is a history of slavery and human-trafficking. During the 1700s and 1800, thousands of enslaved peoples were taken from their homes in Senegal and forced to work in fields, factories and estates across the Americas. Many Senegalese people were displaced from their homes and had no choice in how and where they lived.

During this time some Senegalese people may have come voluntarily to the U.S. but there is little documentation that tells the stories of such people. It wasn’t until the twentieth century that people from Senegal started to come to the U.S. voluntarily to start a new life, look for work and set up communities.

Many immigrants from Senegal settled on the East Coast in places like Manhattan, New York City, and further inland to Chicago. During the 1970s an influx of Senegalese people arrived in the U.S. in the pursuit of better education and work opportunities. Many sought to learn at first-class higher education institutions and get jobs in international companies.

Until the end of the twentieth century most Senegalese arriving were young men, but since the turn of the century women from Senegal also began to emigrate in larger numbers. This all resulted in the growth of Senegalese communities in places like Chicago, New York and New Jersey.

Senegalese Communities in the U.S.

According to the most recent census there are just under 20,000 people of Senegalese origin or descent living in the United States. Compared to other African nations this number is relatively small. Nevertheless, Senegalese immigrants have built strong, close-knit communities and have for many years formed a vital part of neighborhoods, towns and cities across the U.S.

The largest Senegalese communities in the U.S. can be found in New York, where they form one of the four main Muslim groups from Africa. Little Senegal, or Le Petit Senegal is a major enclave within the New York City borough of Manhattan.

For many years, Senegalese people have had strong community ties in Harlem and have mixed with many other immigrant communities. To learn more about the Senegalese communities in the US take a look at the website of ‘Association of Senegalese in America’.

Senegalese and people of Senegalese descent have made valuable artistic, scientific and political contributions to U.S. society for many years now. Below we’ve highlighted a few notable Senegalese-Americans, whose work has made them famous in the U.S.:

Issa Rae, also known as Jo-Issa Rae Dipop, is an actress, writer and producer. She started out on YouTube and has since become a household name in the U.S. for her work on her HBO television series Insecure.

Rae was born in California. Her father is from Senegal and her mother is from Louisana. For a short time during her childhood she lived with her family in Dakar, Senegal but she was raised mostly in Potomac, Maryland.

Ousmane Oumar Kane is a revered scholar and Professor of Contemporary Islamic Religion and Society at the Harvard Divinity School and the Department of Near Eastern Languages and Civilization at Harvard University.

He has been teaching at Harvard since 2021 after spending time teaching at Columbia University. Before teaching in the U.S. he taught for many years at the Université Gaston Berger de Saint-Louis in Senegal.

Mame-Anna Diop is a well-known American actress and model. She has appeared in films like Us and Nanny as well as in popular television series like Titans, 24: Legacy and The Messengers.

Diop was born in Senegal and moved to the U.S. with her family when she was only six. At the age of 16 she moved to New York to pursue her dreams of becoming an actor and a model.

Remittance from the U.S. to Senegal

Remittance from the U.S. to Senegal has grown in recent years as more Senegalese-American citizens establish roots in the states and feel capable of sending money home to family and friends.

In 2020, Senegal received over $2.5 million in remittance from the U.S. according to WorldBank.org. This is a significant growth since the early 2000s where the amount of remittance flowing between the two countries was practically negligible.

Over the years the political and economic situation in Senegal has become more stable. As a result Senegal's ability to trade with other countries and operate on the international stage has grown.

This has enabled more young Senegalese to emigrate, gain good employment and earn the money they need to send home to support their loved ones. It is a promising time and the future looks bright for Senegalese migrants who want to start a new life overseas in places like the United States.

If you’re based in one of our licensed states in the United States and you want to send money home to your loved ones in Senegal, you can use Small World.

Small World is an international money transfer service that helps millions send funds overseas. If you need to send money to Senegal you could do this easily via Cash Pickup, Bank Deposit, Mobile Wallet or Airtime Top-Up.

So, whether you prefer to send funds via airtime top-up or bank deposit, Small World is here for you. Our local bank partners in Senegal include La Poste, Orabank, Cogina, UBA, ATPS, La Banque Agricole and many more.