What is Holi and why do people celebrate it? 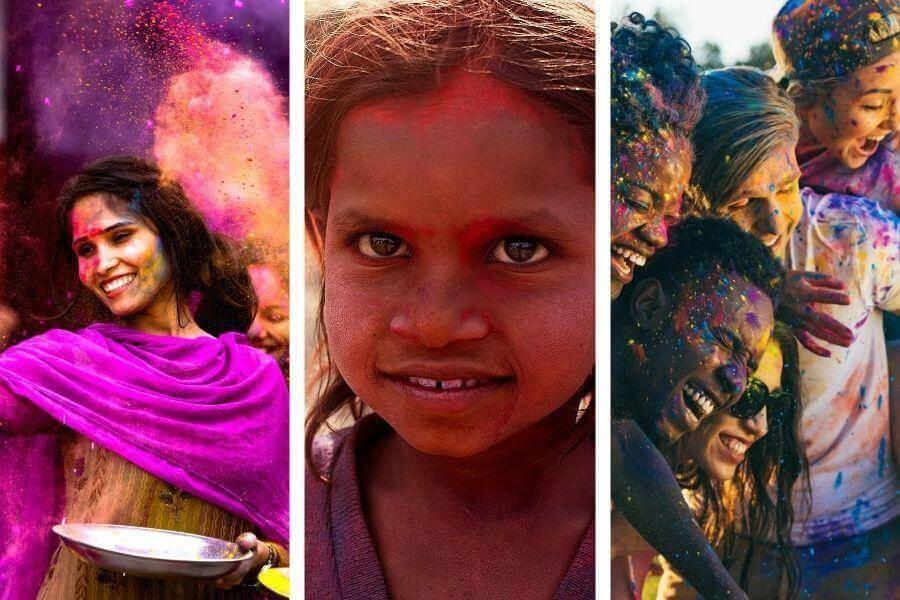 If you’ve lived in or visited the Indian subcontinent during March you’ll know exactly what we mean when we talk about the festival of Holi. This explosion of joy and coloured dye is a unique celebration like no other! While it may be famous for its clouds of colour what does Holi actually celebrate? And, who generally celebrates it? Here, we answer a few questions about Holi:

What is Holi festival?

Holi is an annual festival that marks the end of winter and the hopefulness of spring.

It celebrates love, new life and the symbol of the triumph of good over evil. It is also commonly known as the ‘festival of colours’, or the 'festival of love'.

The holiday is one of the only times when social restrictions (covid aside) that are associated with caste, sex, status and age are loosened. During Holi, people from all different walks of life come together: rich people and poor people, young and old, men and women, and employees and employers. [Religion Facts ]

Where do people celebrate Holi?

Holi originated in India, but is also celebrated in other parts of South Asia, including Nepal and Pakistan, and is also enjoyed by Hindus all over the world, perhaps like yourself.

If you’re living and working abroad at the moment, or perhaps are unable to get home due to Covid restrictions, you may well be celebrating Holi in other areas of the world.

According to Londonist , there are around 400,000 Hindus living in London and west London. Are you one of them? In particular, the boroughs of Harrow and Brent are popular places for Holi celebrations in the UK, but events take place all over.

You also may have read about the criticisms of the way Holi translates to western culture. Events like the “Colour Run”, which involves throwing coloured dye, ignore the roots of the festival completely and turn it into both a party and a money-making enterprise.

Some disagree, and believe that Holi-like events (however they are celebrated) are good for cultural understanding and bringing people of different cultures together. [Time ] What do you think?

When is Holi celebrated?

Holi is generally a two-day festival. It used to be five days, and is still celebrated for more than two in some parts of India.

For example, in Goa, Holi is called “Ukkuli” and The Colour Festival is part of the spring festival, known as Śigmo, which lasts for about a month.

In Maharashtra, Holi festivities – called “Shimga” - last five to seven days. The colour celebrations associated with Holi take place on the day of Rang Panchami, five days after Shimga, and during this longer festival, people are asked to forgive and forget existing rivalries and start new healthy relations with all.

In Manipur, Holi is a six-day celebration and part of a larger festival called “Yaosana” that involves singing, dancing, burning of a thatched hut. It is generally a more religious affair, which celebrates Krishna.

The date changes each year, and depends on the lunar cycle. It begins on the evening of “Purnima”, or the Full Moon Day, and falls in the Hindu month of Phalguna, which is February and March in the Gregorian calendar.

This year, it will be celebrated from March 28th to March 29th .

The origins of Holi

Holi is a Hindu festival, but it is also generally considered to be the least religious of all the Hindu holidays.

Poems that document Holi celebrations date right back to the 4th century CE and there are a few different stories that are used to describe its origin. The most popular version is to do with a Hindu deity called Vishnu.

Do you know the story? If not, it goes something like this...

There was once an evil king who became so powerful that he forced his subjects to worship him as their god. However, the king’s son, Prahlada, refused to do this, and continued to worship Lord Vishnu instead. This made the king angry, so he got his sister, Holika, onside, and together they plotted to kill Prahlada.

Holika happened to be immune to fire. She tricked Prahlada into sitting in a pyre with her and when the pyre was lit, she assumed that it would kill him and not her.

It didn’t quite work out for her.

Instead, the boy’s devotion to Lord Vishnu meant that he was unscathed by the fire, while Holika was burned to death, despite being immune to the effects of fire. The festival is named after Holika. [Time ]

But, while there is a mythological root to the festival, modern day celebrations are enjoyed more due to the opportunity to disregard social norms, "let loose" and be free. [Religion Facts ]

How do people celebrate Holi?

Some families do hold religious ceremonies to celebrate Holi, but for the majority of Hindus, Holi is more a time for fun, and it’s full of dancing, singing, practical jokes and games.

It’s mostly known for its colours and the throwing of brightly coloured powder paint called abir or gulal at anyone and everyone. It’s also famous for its pichkaris (water guns) that are used to fire coloured water.

It starts with Holika Dahan, though names vary in different regions [Londonist ]. On this, the first evening of Holi, people light bonfires to signify the burning of evil spirits. Wood, dried leaves and twigs are thrown onto the fires, as well as roasting grains, popcorn, coconut and chickpeas.

The next day, everyone – no matter your caste, age, gender - goes into the street to throw paint at one another.

The day ends, traditionally, with families gathering together for festive meals and the distribution of sweets among neighbours and friends. Of course, this year the coming together of families and friends will be reduced because of social distancing.

Do the colours have meanings?

Yes. Each one carries some symbolism, although these are not widely considered.

How can you celebrate Holi in an eco-friendly way?

While Holi is a lot of fun, it can also be a festival that creates a lot of waste and the environmental impact of both wood burning and coloured dye can be a problem [holifestival.org ]. People are looking for ways to celebrate, but are mindful of this. So, let’s look at a few ways you can celebrate, wherever you are, in an eco-friendly and safe way:

Why not make some of these suggestions to your friends and family and send money home to gift them the supplies and materials? Remember your first digital transaction with Small World is fee free.