What are the Public and Bank Holidays in Spain? 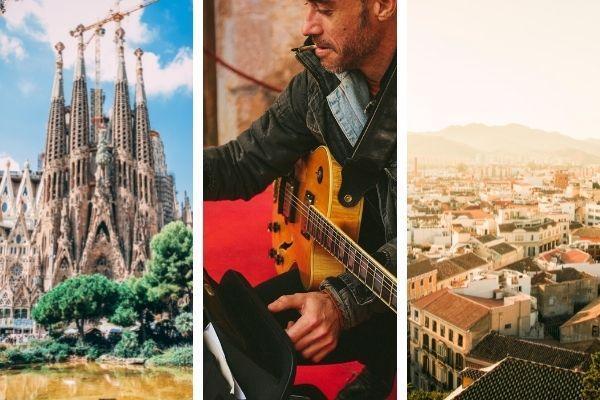 Tradition and celebration are important parts of life in Spain. Throughout the year there are a variety of national, religious and public holidays that are observed across the country. Bank holidays are days when people get the day off work and get to rest and spend time with family and friends.

Bank Holidays are also known as ‘Red Days’ in Spain as it was tradition to mark these days red on the calendar. Most of these days are either linked to religious celebrations or commemorations of significant national events.

In this post we’ll highlight a number of public and bank holidays in Spain including:

As people recover from the festivities on New Year’s Eve they are able to get the day off work and rest with family and friends. New Year traditions in Spain are varied and often linked to the cultural heritage of cities throughout the country.

Many stay at home until midnight and as the clock strikes 12 they eat doce uvas (twelve grapes), one by one with the striking of the clock. The chiming is broadcast across the country and celebrations will take place in villages, town squares, and central squares like Puerta de Sol in Madrid.

Then like many other countries around the world on January 1st schools and businesses are closed and the day is given over to rest and recuperation.

Spain is still a largely Christian nation. According to the most recent census over 57% of Spanish citizens identify as Catholics. Throughout the year there are a number of Christian holidays that are also celebrated as public/bank holidays where citizens get the day off work and children get a day off school.

Epiphany or Theophany, which occurs on January 6th, is a public holiday which celebrates the visit of the Magi to Christ. El Día de los Reyes Magos, or the Three Kings Day, is celebrated on the night of January 5th, but actually takes place the next day.

There are festivities and parades around the country and children place grain or straw in their shoes for the horses of the Three Kings. It is also the day that most Spanish people exchange their Christmas presents.

One of the other most important religious days in the Spanish calendar is Good Friday. Easter celebrations climax on Good Friday when people all around Spain stay up through the night to commemorate the crucifixion of Jesus Christ.

It is an auspicious day observed with a variety of religious rituals and traditions. In Spain the week leading up to Good Friday and Easter Sunday is known as Holy Week (Semana Santa). Many religious folk walk in processions especially in places like Leon where 15,000 people gather every year to undertake a solemn and deeply spiritual procession around the city.

Labor Day in Spain takes place on May 1st. It is a national public holiday to celebrate the social and economic achievements of workers across the country. Labor Day is also known as Día del Trabajador or Primero de Mayo and was first celebrated on May 1, 1889.

Celebrations of Labor Day were prohibited for four decades between 1935 and 1978 because of the Francoist State. Ever since Labor Day was re-legalized in 1978 it has been a national holiday marked by public demonstrations, protests and social marches.

Spain’s National Day, also referred to as Día de la Hispanidad, is held every year on October 12. The day is a celebration of Spain’s contribution to the rest of the world and their legacy on the international stage. The day commemorates Christopher Columbus’s discovery of the Americas for Spain on October 12, 1492.

The day is often marked with plenty of pageantry and military parades including 21-gun salutes and aircraft flyovers. In recent years the day has also featured many protests by people who believe it is wrong to celebrate Spain’s colonial past.

All Saints’ Day in Spain takes place every year on November 1st. Día de Todos los Santos is a national and Christian holiday where people commemorate those you have passed away. As in many Hispanic countries, people visit the graves of dead relatives and family to lay flowers and remember them.

Traditionally the play Don Juan Tenorio is performed and in festivals across the country particular dishes will be served such as roasted chestnuts, castañas, with small almond cakes, pannellets. All Saints’ Day is a reminder of the importance of family and religion in Spanish life.

To mark the occasion, the doors of Spain’s Congress are thrown open to the public and those that visit are given a gift. The day is the start of the December holidays in Spain and a long weekend is often taken alongside the next holiday on this list, the Feast of the Immaculate Conception.

The Feast of the Immaculate Conception is a national holiday in Spain that takes place on December 8th. It is a Roman Catholic celebration to recognize the conception of the Virgin Mary. It is normally a bank holiday and many Spanish people, with the day off work, choose to rest and make some religious or spiritual gestures.

Christians throughout Spain will attend special church services and many see the day as the beginning of the Christmas season. You may also see statues of the Virgin Mary paraded through the streets.

Support your loved ones during the holidays

If you want to support your family and friends during the holidays you can do so with Small World. We are an international money transfer service that helps millions around the world transfer money quickly and securely.