How to Celebrate the Perfect British Christmas 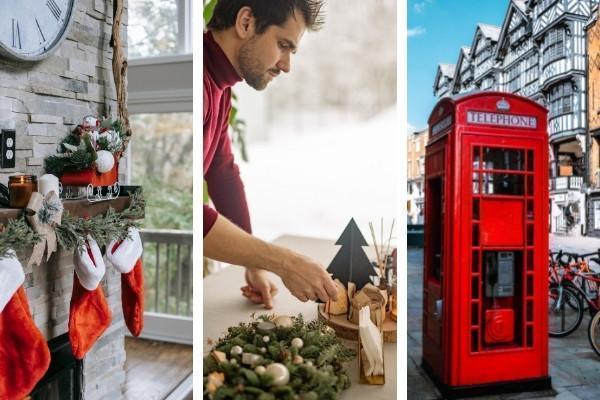 Christmas traditions and customs vary from country to country. However, the essence and spirit of Christmas is the same around the world - to have a good time with your family and friends.

If you are working or studying in the UK and you feel homesick, Christmas is a great opportunity to get together with loved ones to celebrate. If you haven’t been able to return home for the holidays you may be nervous about hosting your first British Christmas. Don’t worry! We’ve got you.

In this post we’re going to highlight a number of topics to help you organise the most perfect British Christmas, including:

Christmas has a long history in Britain but many of the modern traditions currently celebrated can be linked to the Victorian British Christmas traditions from the 19th century.

Many hundreds of years ago, British people celebrated Yule during the mid-winter season. Then as the Anglo-Saxons gradually converted to Christianity this Yule celebration became Christmas (Christ Mass) and became linked to the birth of Jesus Christ.

In the 18th and 19th century, Christmas traditions in Britain really took off. Many of the Christmas carols sung today were written during that period. And many of the things that are now associated with a British Christmas such as Christmas Cards, Christmas Trees, Christmas Crackers, Father Christmas, mistletoe and Christmas gift giving became popular in the 19th Century.

Advent calendars are more popular in the UK than they are anywhere else in the world. Drawn from the Christian Advent celebration, these calendars mark the coming of Christ into the world and help you count down the days to Christmas.

Today, the calendars come in various forms and for the month of December you can open one window on the calendar every day to count the number of days until Christmas.

If there are children coming over you can get Advent Calendars with chocolates in every window, that can be opened and eaten on the days leading up to Christmas.

Gift giving is a great holiday tradition that is popular in countries all around the world. A British Christmas is never complete without some presents under the Christmas tree.

To really strike a chord with your British friends and family you should give them gifts that they can connect with on an emotional level. Gifts that are funny or thoughtful are usually the best sort of presents to give to a British person at Christmas.

Christmas is one of those few occasions when drinking before lunchtime isn’t frowned upon. In fact, it is a tradition that some British people look forward to.

So, remember to pop open the champagne as soon as everyone exchanges gifts in the morning. The rest of the day is a big party with non-stop drinking and merry-making.

In the UK, Christmas is a time for eating. The Christmas Lunch or Dinner usually takes place in the early afternoon and is the central feature of the day. It is a time when family and friends can all gather round the table to eat and laugh.

The traditional meal for Christmas in Britain is a roast turkey with all the trimmings like potatoes, stuffing, parsnips, carrots, sausages, brussel sprouts etc. In recent years there is more variety, and most people won’t mind you experimenting with other meats if Turkey is not your thing. As long as you include all the extra veggies and carbs, you’ll be able to make any British person happy with your Christmas dinner.

Turn on the TV

While you have guests coming over for Christmas, don’t hesitate to turn on the TV for some hilarious shows like Gavin & Stacey or Mrs. Brown’s Boys. There is also plenty of Christmas-specific programming on TV and the same sorts of films and TV shows usually appear every Christmas.

Whether it's ‘The Unseen Two Ronnies’, ‘Harry Potter and the Chamber of Secrets’ or ‘Wallace and Gromit', you can be sure that your English guests won’t consider it rude if you turned on the TV in the background of your festive celebrations.

Plus, if you and your guests are going to be drinking all day, adding in a dash of slapstick humour will only aid in lightening the atmosphere.

Catch-up with the Queen

Some British people consider it a tradition to sit down and listen to the Royal Christmas message. Usually, it is a quick round-up of all that’s been going on during the year and how the royals have done their bit to protect the best interests of the nation.

Are you a decent cook? Christmas time is a great opportunity to try out your skills.

Try baking some mince pies for your guests. In the UK, this is a must-have item on the Christmas menu and is made from minced meat and flavorful spices such as cinnamon and nutmeg.

However, if you are expecting relatives or friends with children to visit you, then make sure to bake some extra mince pies. The kids might want to leave some of those delicious pies with some brandy for Father Christmas on Christmas Eve.

Make the most of your leftovers

While you are working on the menu, don’t be afraid to cook a little more than required. Eating leftovers on the next day is almost a tradition amongst Brits and is quite common since Boxing Day (26th December) is also a holiday.

If your guests are staying over for Christmas, leftovers are a great way to feed them if they’re still hungry late on Christmas day or on Boxing Day. Making the most of your leftovers will also give you a break from cooking.

Christmas pudding is as dear to the English as Father Christmas is to the rest of the world. This delectable pudding made from dry fruits, spices and rum makes the perfect Christmas dessert. If this is your first British Christmas we recommend buying one before you try making one, as they can be quite tricky for beginners.

Support your loved ones during the holidays with Small World

Christmas is all about sharing joy. If you need to send money to your loved ones or make an overseas donation over the holiday period you can do so easily with Small World. We are an international money transfer service that helps millions of people around the world support their overseas family and friends.

The process is quick, safe and easy because we know how important it is to be able to support and care for your loved ones. So remember, if you want the perfect British Christmas, Small World can help!

Send Money to the UK