Ramadan celebrations across the globe 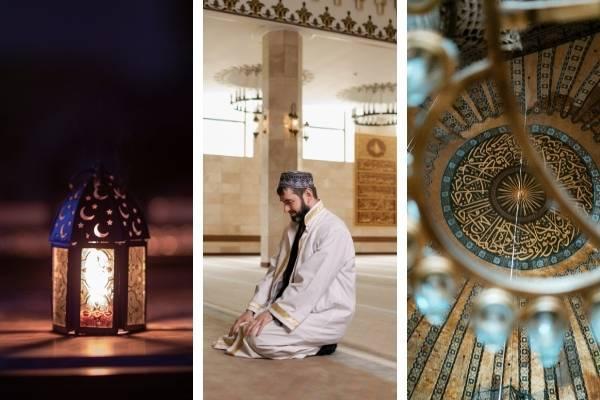 Soon after lent fasting and Easter comes Ramadan— a period when the Muslim community observes day-long fasting and prayers. This is also a period of family gatherings and hosting ‘daawats’ or dinners, which is dear to the Muslim communities worldwide. For Muslims who live away from home, this is the period when they visit their near and dear ones. However, for those who don’t, the community makes several arrangements which enable them to worship five times a day, and get a decent meal before dawn and after sunset.

Generally, the preparations for the month-long day-time fasting begins with a pre-Ramadan shopping spree. With designers rolling out exclusive collections, London shines bright with pre- Ramadan clothing and perfume collections. This is crucial as the womenfolk need to cook at ungodly hours and host ‘Iftar’ parties for friends and relatives, besides praying and following other mandatory religious customs. Also, this is the time when there are talks, seminars and banquets organized for the followers of Islam, which are duly attended by most Islamic followers.

​Ramadan is the 9 th month in the Islamic lunar calendar, and is observed by fasting during the day- time and adhering to a certain lifestyle. This was the very month when Prophet Mohammed, the Founder of Islam is believed to have received the message of God, recorded in the holy book Qu’ran. Hence, it is the most revered period of the year and is observed in a certain manner, which includes a change in lifestyle, holy recitals and following the path of virtue.

For the followers of Islam, it is obligatory to fast during this month, unless they are sick, lactating, pregnant, menstruating or under certain other circumstances. In fact, fasting and donating during this period is considered to be a religious duty, which is strictly followed by Muslims worldwide. Heads of mosques across the globe roll out a schedule which enables the followers to stick to a certain time for observance of rituals. With this, the Muslim community is all set to begin the month- long abstinence and fasting, which they believe to earn them a favour from the almighty.

Ramadan across the Globe

​Just before Ramadan, wealthy Arabs flock London to shop perfumes, jewellery, designer wear — you name it! However, the Arabs also like to ensure that those who work for them follow this month- long observance. Therefore, Arabian businesses cease to operate during this month-long period, which ensures that the entire community can adapt to the obligatory lifestyle changes required during this period. This includes sticking to all that is virtuous such as abstinence, forgiveness, and helping those in need. The Muslim community in Philippines sticks to propagating the significance of Ramadan and serving ‘Abodo’ which is a chicken and noodle delicacy along with other eatables and refreshments at Mosques, relished in that region. While in London, restaurants run special events and discounts during this period. There are also special tents, which are typically places organized all over London where the Muslims can worship during this period.

Ramadan is a month-long period when the Muslim community worldwide observes fasting from sunrise to sunset, with just two meals a day — ‘Suhur’, a pre-dawn meal and ‘Iftar’, a meal after the sun sets. Over time, these meals have turned into festive gatherings better known as ‘Iftar’ parties, which include banquets at community halls, private gatherings and more. Also, wealthy Muslims generously host pre-dawn and post-sunset banquets for those fasting during this period. In fact, London’s Mayor Sadiq Khan also reportedly hosts an event during this period. As the most sacred month, in Islam, it is celebrated worldwide with due customs and rites.

​During this period, followers of Islam are required to donate, or give ‘Zakat-ul-Fitr’ or ‘Zakat’, for short. This requires them to mandatorily donate a part of their earnings to the lesser fortunate, if they can afford to do so. This is a distinct facet of this religion which requires its followers to give back to the society. The final goal is to ensure that none goes without the basic necessities such as food, shelter and clothing. So if you live away from your hometown and wish to donate to the society to which you belong, then you need to do it in the best way possible. You can do that by picking online transfers that give you the best exchange rates at nominal transaction charges. After all, a small gesture goes a long way and for those hailing from Asian countries such as Pakistan, conversion rates matter the most.

Other customs and practices

​Besides fasting and charity, the Muslims are also required to abstain from sexual activities, anger and other vices of the human nature. Those who follow Islamic traditions very strictly also refrain from entertainment of any form during this period. So it’s not uncommon to see the televisions in the Islamic households turned down, or restricted to religious broadcasts only. Also, traditional Muslims prefer to break their fast with dates, and so don't be surprised if you see enormous date collections all over London during this period.

Across nations, religious leaders and congregations do their best to encourage the followers of Islam to fast. From lavish banquets to motivational speeches, this is one period when the entire Islamic community comes together as one. Finally, this period concludes after a declaration made by the religious Heads, worldwide. Depending on the position of the moon, the religious heads from Mecca — the holy place of the Muslims — declare the Eid-ul-fitr, which marks the end of the month-long fasting. Ramadan, which concludes with the celebration of Eid-ul-fitr is the most important celebration, which marks the very genesis of this religion, which has over a billion followers worldwide.