Colombian Communities in the United States 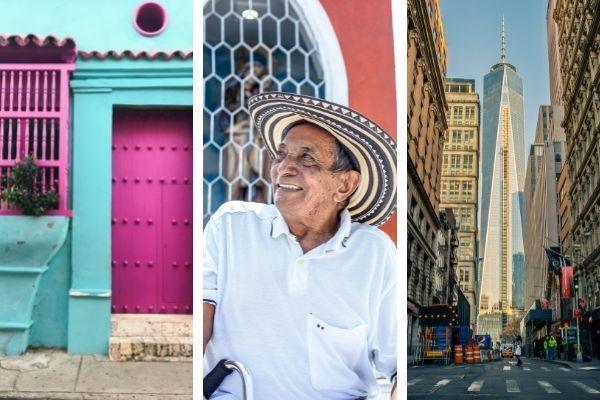 If you are curious about the growth and evolution of Colombian immigration in the United States these may be some of your most pressing questions. Well, we’ve got you covered.

In this blog we’ll be exploring a number of topics to do with the Colombian-American experience in the United States, including:

The History of Colombian Immigration to the U.S.

Colombians have been traveling to, and settling in, the U.S. for many years. However, it wasn’t until after the First World War that the first Colombian communities began to form in New York. A second wave of immigration occurred during the 70s and 80s as the relaxation of certain immigration laws made it easier for Colombians to travel to, and live in, the United States.

A third wave of immigration happened during the 90s and early 2000s as political and economic trouble in Colombia caused some Colombians to search for a safer and more prosperous life abroad. New Colombian communities began to form in California, Florida and New Jersey alongside other immigrant communities from Latin America, Africa, Asia and Europe.

Colombian Communities in the U.S.

According to the last U.S. census, around 1.2 million Hispanics of Colombian descent lived in the U.S. This number, which is definitely much higher today, includes immigrants from Colombia as well as second and third generation Americans with Colombian ancestry. It is a large number but still only accounts for 2% of the U.S. Hispanic population. In fact, Colombians are the seventh-largest population (https://www.pewresearch.org/hispanic/fact-sheet/u-s-hispanics-facts-on-colombian-origin-latinos/) of Hispanic origin living in the U.S.

The most significant Colombian communities can now be found in Miami and New York, where tight-knit neighborhoods have expanded over time and the streets are full of Colombian restaurants, stores and clubs.

For Colombians who have just moved to the U.S. there are several benefits to starting life in one of these communities in New York, Miami or LA. For example, here Colombians can meet other Colombians easily, be enriched by a sense of community away from home and easily source imported Colombian groceries and products. You can also get access to Colombian-specific events, organizations and initiatives.

The most recent census gives us an indication of areas with the largest Colombian communities, including:

Today, according to Pew Research the Colombian population is concentrated in Florida (31%), New York (14%) and New Jersey (12%).

Colombians and people of Colombian descent have made valuable artistic, scientific and political contributions to U.S. society for many years now. Below we’ve highlighted a few notable U.S. Colombians, whose work has made them famous in the U.S.:

Sofia Vergara is a Colombian and American actress and model. She is most well-known for her role as Gloria in the ABC comedy series Modern Family. From 2013 to 2020 she was the highest paid actress in American television and became a household name for her performance on the show and in various films during that period.

Before she moved to America and found fame in Hollywood she was a very successful model in Colombia. She was discovered by a photographer while walking on a Colombian beach and quickly rose to modeling prominence, appearing in commercials with the likes of David Beckham.

José Álvaro Osorio Balvín, known around the world as J Balvin, is a Colombian singer and rapper. He is one of the best-selling Latin music artists of all time and continues to top the charts in the U.S. and around the world.

Balvin was born in Medellín, Colombia and moved to the U.S. when he was seventeen. Balvin gained popularity performing at clubs in New York and soon began to make a name for himself on the music scene. He has won five Billboard Latin Music Awards alongside four Latin Grammy Awards.

American actor, comedian, producer and writer, John Leguizama was born in Bogotá, Colombia in 1960. When he was a child his family emigrated from Colombia to New York City where they lived in neighborhoods like Jackson Heights.

Leguizamo made his name starring in films like Carlito’s Way, the infamous Super Mario Bros. as Luigi, as well as Romeo + Juliet, Moulin Rouge! And most recently as Bruno in Encanto. He has appeared in over 100 films, produced over 20 films and starred on Broadway in a number of productions.

Julie Banderas is a well known television news anchor for Fox News. As a primary news anchor based in New York City Banderas has become a recognizable presence on U.S. televisions.

Banderas was born in the U.S. to a mother who emigrated from Colombia and a father who was a US Navy veteran and civil engineer. Banderas graduated from Emerson College before pursuing a career in news in Boston, Virginia and eventually New York.

Remittance from the U.S. to Colombia

With around 6.8 billion U.S. dollars of remittance flowing into Colombia from countries around the world, it is one of the countries with the highest migrant remittance in Latin America. Remittance transactions have grown steadily over the years as more and more Colombians have decided to make their home in countries like Mexico, the U.S. and Canada.

According to some recent studies, every year over 31% of remittances received in Colombia came from migrant workers in the U.S. This is an indication of the importance of Colombian communities to the actual economy of Colombia and their family and friends still living there. Remittance levels continue to grow each year.

One of the triumphs of Colombian communities in places like New York, California and Texas is that many Colombian-Americans have been financially empowered and able to send money home to their loved ones. So, how can you send your money home to Colombia quickly and safely?

If you’re based in one of our licensed states in the United States and you want to send money home to your loved ones in Colombia, you can use Small World.

Small World is an international money transfer service that helps millions send funds overseas. If you need to send money to Colombia you could do this easily via Cash Pickup, Bank Deposit, Mobile Wallet or Airtime Top-Up.

So, whether you prefer to send funds via airtime top-up or bank deposit, Small World is here for you. Our local bank partners in Colombia include Bancolombia, Davivienda, BBVA, Pagos Internacionales, Banco de Bogotá and more.

Transfer Money from the U.S.