All about Navratri and how London celebrates it 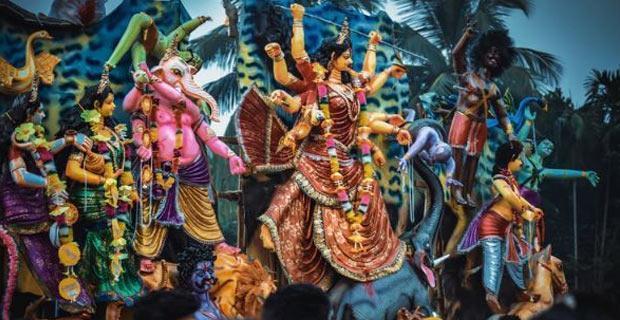 Navratri literally means ‘the nine nights’ and is one of the most awaited Indian festivals, popular for the night-long vigil and the worship of Goddess Durga. This is usually followed by other cultural events such as singing hymns and performing folk dances to the tune of devotional songs. During this period, event organizers from across the globe bring in their best singers and entertainers, sparing no efforts to keep the crowd engrossed.

During Navratri, the elderly usually choose to spend their time singing devotional hymns, while youngsters look forward to shaking their legs. After all, this is the time when devotees perform ‘Garba’ and ‘Dandiya’, the popular folk dances from Western India. Besides India, these celebrations are also quite popular in the UK, South Africa, US, Canada, and Australia. In fact, Indians across the globe celebrate it by organizing and participating in community-based or open-to-all ticketed events. Let us now get a quick glimpse of why this festival is celebrated.

The Legend of Navratri

​ Legend has it that once a Bull-faced demon named ‘Mahishasura’, intoxicated by the power of a boon that he was granted, broke havoc in the three worlds. To put an end to him, Goddess Durga had to come down to earth and combat him, as the boon protected the demon against everyone else. So, a fierce battle ensued between the Goddess and the demon for nine nights, during which the Goddess destroyed the demon and all the other evil elements.

While dying, the demon put forth his last plea to the Goddess, praying that his name be taken before hers, and so Goddess Durga is also called ‘Mahishasur-Mardini’, which literally means ‘the slayer of Mahishasur’. So these nine days are dedicated to celebrating the power of Goddess Durga, who emerged victorious in the fierce battle. On these days, devotees worship each of her nine forms and each day is dedicated to one form. As she emerged victorious on the tenth day, it is marked by celebrating ‘Vijayadashami’ which literally means ‘the tenth day of victory’.

London has a large population of immigrants with Indian origin, and that makes Navratri celebrations quite a big deal. Besides a score of community-based Navratri events, there are also some ticketed open-to-all events that one can participate in. Most of these events include traditional music, and North-Western folk dances such as Dandiya, which is played with a stick in both hands and Garba, which involves clapping and group dancing in a large circle. All of this entertainment goes on amid paid food stalls that serve mouth-watering snacks and sweets.

Now if that sounds exciting and you are all set to participate in these celebrations, then you could try doing so at the Harrow Leisure Center. The International Siddhashram Shakti Center would be organizing Navratri celebrations out there, between 29 th September and 8 th October. As the celebrations would commence around 8 PM, you can attend it after returning home from work. However, you need to book your tickets in advance, and you can do that online.

Another event that you can look forward to in London is the ‘Navratri Utsav’ organized by the Bromley Temple Trust. This is a ticketed event that is free for children aged under 5 years and for the elderly folks. However, regardless of whether or not you need a ticket, you must register, well in advance. Also, there are other exclusive Navratri events and competitions for kids, like the Bal Vihar Children’s Garba held on the 29 th day of September at the Campion School and the Slough Hindu Mandir Garba for kids held on the 5 th of October.

How does India celebrate Navratri?

Navratri is celebrated with pomp and gusto across India by the Hindu community and this includes carnivals, fairs, and cultural events. However, every region has its own way of celebrating, so let us now look at some of the most prominent Navaratri celebrations in India.

The Mysuru Dasara and the Royal entourage

The Mysuru Dasara carnival takes place in Mysuru during Vijayadashmi, as this place holds great significance and is connected to the legend. After all, it is here that the legendary battle between the Goddess Chamundeshwari, a fierce form of Goddess Durga and the bull-faced demon Mahishasuru ensued.

So soon after Navratri, the highly famed Mysuru Dasara begins, which involves a procession of decorated elephants parading the city with an idol of Goddess Chamundeshwari. This is followed by the Royal scion, also on an elephant and people from all over the world flock to watch this royal entourage.

For ten nights, the city of Mysuru and the Mysuru Palace remain illuminated with decorative lights and there is a festive mood all over the city. Parallel to that, a month-long fair called the Dasara Exhibition also takes place, in which there is no dearth of entertaining rides, food stalls and artisans from all over India.

In West Bengal, ‘Durgotsav’ or the festival of Goddess Durga is celebrated in full swing, from the sixth day of Navratri. These celebrations go on for five days, consecutively, which includes processions, prayers, hymns, and the destruction of Mahishasur, the Bull demon’s clay idol. On the tenth day, these celebrations conclude with the immersion of the deity’s idol, in the river. The immersion symbolizes the return of the Goddess to her husband, Lord Shiva.

Followers of Hinduism, across the globe, consider it highly auspicious to make new investments or to acquire assets such as lands, vehicles, etc... during Navratri and Vijaydashmi. So, if you plan to follow the suit, then here’s how you can get the most out of it. Consider transferring your hard-earned money through Small World, to get the best exchange rates and low transaction fees.