A Peep into Krishna Janmashtami Celebrations in London 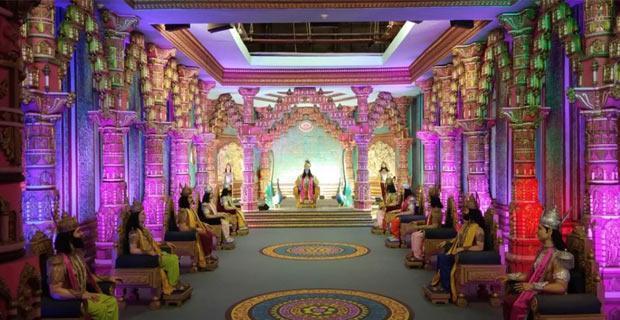 The UK is a land of diverse cultures and has a large population of people with Indian origin, and those drawn towards Indian culture and beliefs. So, Indians aren’t the only ones who eagerly await Janmashtami, which is celebrated on the 24 th  day of August 2019. Every year Janmashtami celebrations also attract a healthy number of locals. Ever since The International Society for Krishna Consciousness (ISKCON) established itself in the West, it has attracted people from all over. As a result, Krishna Consciousness has evolved as one of the most popular cults, across Europe.

Krishna Janmashtami, also known as Janmashtami is celebrated as Lord Krishna’s birthday when people gather at temples and celebrate this 2-day event by chanting the name of the Lord. Legend has it that the Lord himself descended on earth to protect the virtuous and to rid the world of evil. Like every other festival associated with Lord Krishna, even Janmashtami is celebrated amid fun and frolic, by Indians across the globe, especially in London.

How Does London Celebrate Janmashtami?

Janmashtami is celebrated at most Indian temples across London and the enthusiasm of the devotees to participate in these celebrations is commendable. Most of these celebrations include prayers, offerings of butter, clarified butter, food and sweets to the Lord, which is later distributed amongst the devotees. This is followed by the distribution of free food and a night vigil, which often lasts until midnight, which is precisely when the Lord was born. The hours before the birth of the Lord is celebrated by chanting hymns to welcome him, and on the next day, devotees celebrate his birth.

The day after the birth of Lord Krishna is full of fun and frolic and is celebrated by playing several games that Lord Krishna played during his boyhood days. Those games are emulated by youngsters, which creates an electrifying atmosphere, while the rest usually continue their worship. In London, the two most popular temples that attract devotees in large numbers are the Bhaktivedanta Manor, at Watford and the BAPS Swaminarayan Mandir, which is one of London’s oldest temples. Let us now check out how these two temples intend to celebrate Janmashtami in 2019.

Bhaktivedanta Manor is all set to welcome thousands of devotees from 23 rd  August to 25 th  August to rejoice the birth of the Lord. So if you plan to join them, you are in for a treat but only once you get there. Here’s what you need to be aware of in order to get there — as the routes are going to be restricted, the only way to get to Bhaktivedanta Manor on Janmashtami, would be via Sandy Lane from A41. However, we recommend that you read this, for more clarity on how you can get there. There is ample space for parking if you plan to drive to the temple, but if you wish to take the public transport, then the easiest way to get there is by hopping into the shuttle from the bus stop, which is located right opposite to the Stanmore station.

BAPS Swaminarayan Mandir, better known as Neasden Temple is yet another temple in London that attracts devotees in large numbers, on Janmashtami. The Neasden Temple is London’s oldest Krishna temple and one that celebrates Janmashtami the entire day, on 24 th  August. This day-long celebration starts with offering heaps of delicacies to the Lord, which is known as ‘Annakut’ or the food mountain. Currently, these delicacies are piled up on tiers, to resemble a mountain. The ‘Annakut Darshan’ at the BAPS Swaminarayan Mandir is scheduled between 9 AM and 8 PM on the 24 th  of August, amid hymns and chants. The daytime hymns would be sung at 11:45 AM, and the evening hymns at 7:00 PM. That is followed by more hymns at 8:45 PM, which signify the birth of the Lord. BAPS Swaminarayan Mandir also permits wheelchairs for the elderly and the authorities can be contacted for further clarifications.

How Does India Celebrate Janmashtami?

​ India is a land of diverse faiths, but Janmashtami is one of those festivals, which is celebrated throughout India with pomp and ceremony. This includes traditional offerings, hymns, and chants, often around a cradle in which the Lord’s idol is placed. On the next day, youngsters celebrate the birth of the Lord by playing a unique game called ‘Dahi Handi’, which literally means ‘the pot with yogurt’.

Dahi Handi is an expensive affair and millions are donated to make this event even more entertaining. The game involves tying an earthen pot filled with curd, at a great height, which various groups then compete to break. They do so by forming a human chain-like pyramid, in order to achieve this feat. If you wish to witness this event in India, then the best places to visit during Krishna Janmashtami are Mathura and Vrindavan.

The breaking of the earthen pot signifies one of the childhood acts of Lord Krishna, which involved stealing of butter stored in earthen pots, which was reserved to be paid as taxes to the King. Back in those days, taxes were collected in various forms and not by money alone. Legend has it that this was the Lord’s way of protesting against the unscrupulous King, who was also his Uncle.

Usually, Janmashtami celebrations result in enormous expense as it involves serving free food to thousands of devotees. So most devotees usually make a donation, and if you also wish to make one to a certain temple in India, then you certainly should. To ensure that the temples in your homeland get the most out of it, you can make your transfer via Small World, which offers real-time exchange rates and extremely low transaction fees. You can also send a gift to your loved ones, on this special occasion. After all, Janmashtami is a time to celebrate the birth of the Lord, the very origin of unconditional love.