7 Places to eat the best Filipino food in Britain 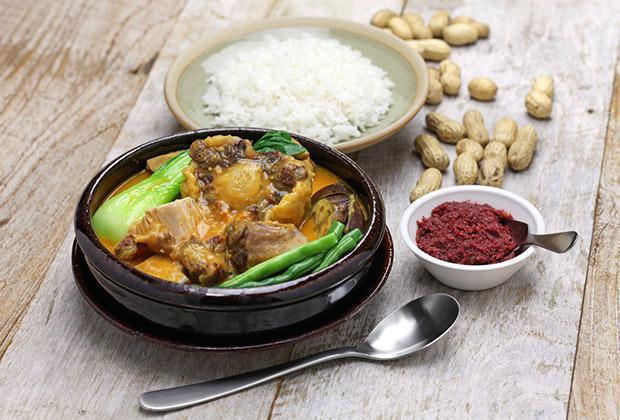 If you’re a Filipino living in the UK, chances are you are missing the real tastes of home. And if you’re not Filipino, but in the years have developed a palate for great Asian food - particularly with the waves of authentic Japanese, Vietnamese and Korean joints that opened up all over the country in the last 10 or 15 years - then you’re going to want to taste this. Nicknamed as Asia’s last secret cuisine, Pinoy food is all about exciting flavours.

Here are a few places to whet your appetite.

Romulo café is the off-shoot of its sister location in Manila, opened by Rowena Romulo using recipes by her grandfather. She tackles criticisms of Filipino food being too beige, by introducing colour in every plate, from sweet potato to edible flowers. Sharing is encouraged, with a menu that has two pages dedicated to main sharing platters.

The team behind Manila Munchies started the pop-up four years ago, when they realise they couldn’t find a single Filipino food joint in the Midlands. They chose the street food route, and can be found at Digbeth Dining club, where food vans take over every Friday and Saturday evening. Their pork liempo is their most popular dish - marinated for 24 hours in their special sauce, then barbecued.

Maynila’s founders, Charl Asuit and Roni Bandong are on a mission to make Philippine cuisine mainstream for the British public, through the hands of chef Steve McSorley, who curates a tasting menu that is a great introduction into Filipino flavours. The menu is changed every quarter, and despite Filipino’s love of meat, vegetarians and vegans are catered for.

Josephine’s is a bit of an institution, founded by Filipino food pioneers Josephine and Placido Poniente. They first moved to London in the 1970s to work in hospitality, then in 1985 opened a sandwich bar where they put adobo in sandwiches, until finally opening the family-run restaurant in 1996.

Set up by two brothers, Mark and Mike, who grew up in Hong Kong on Filipino food cooked by their mother, this South London supper club serves traditional Filipino fare that’s meant for sharing with a group of friends. The name is a collaboration of the first three letters of the national dish Adobo and bros, meaning brothers.

For something traditional, head to Lutong Pinoy in Earls Court. 'Lutong' means 'cook' and 'Pinoy' is another word for Filipino. Their speciality is Kamayan - the ultimate Filipino Feast. Kamayan translates in English as to eat with your hands, which means this dining experience requires no cutlery or plates. It’s a sharing experience for groups, encouraging them to eat together the Filipino way. l

Masarap is the Filipino word for delicious. The aim is to raise awareness of Filipino cuisine, but with a fusion approach. Another venture by siblings who grew up in London with Filipino parents, this pair aspires to put a different take on Filipino food with a modern twist. This includes a Filipino brunch, and alcoholic bubble tea. Delicious!

Send money to the Philippines