What is the currency of Georgia? 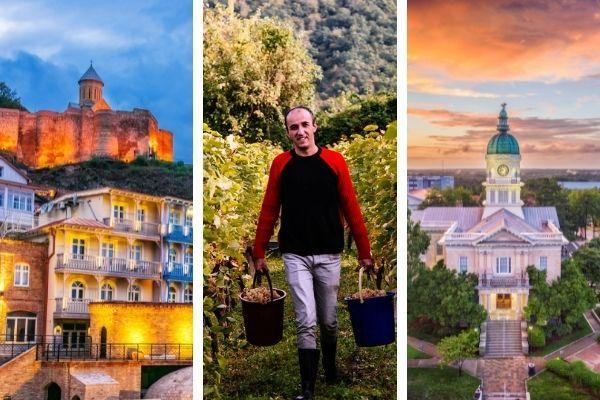 Georgia is a country in the Caucasus at the crossroads of Europe and Asia, bordered by Russia, Turkey, Armenia and Azerbaijan. The country has had a long and sometimes difficult history and today has a population of around 3.7 million people. Despite its relatively small size it is located in a strategically important area and plays a vital role in the relations between Europe and Asia.

So, if you’re interested in Georgia, where’s a good place to start learning? Well, what about the local Georgian currency?

If you want to travel to Georgia or if you want to send money to your loved ones based in Georgia, you may have a few questions. Don’t worry, because we’ve got you covered. Learning a little about the currency of Georgia is a fantastic place to start. That's why in this blog we’ll be exploring everything you need to know about the currency of Georgia and its history over the years.

What is the local currency of Georgia?

The local currency of Georgia is the Georgian lari. The lari can be subdivided into 100 tetri. Both terms come from old Georgian words about property and white. In years gone by Georgia has had various currencies including the abazi, maneti and the Georgian kuponi or coupon. Georgia also used the Russian ruble for many years.

The currency is issued by the National Bank of Georgia and printed by the Polish Security Printing Works. In the 21st century, the Georgian lari has been a vital source of stability for the Georgian economy. Georgia is surrounded by countries that have their own strong currencies or use a common currency like the Euro. As a result the Georgian lari plays an important role for the way Georgia makes financial interactions with their neighbours and other countries around the world.

How is the Georgian lari recognised?

The Georgian lari is recognised by the international currency code GEL and the ISO number 4127. There are various symbols to denote the Georgian lari including i ₾ (), ლ. The language of this currency does not have a plural distinction and therefore all you need to know is that there is a Georgian lari and that can be divided into 100 tetri.

The history of the Georgian lari

The current Georgian lari was first brought in on 2 October 1995. It was brought in to replace the provisional coupon currency that had been used since Georgia stopped using the Russian ruble in 1993. The coupon had been suffering from severe hyperinflation and it was time for a change.

As a result the Georgian lari was introduced at a rate of one million to one compared to the coupon. This enabled the country to steady inflation and return some stability to the economy. Ever since the lari was introduced it has stayed fairly stable and has had reliable exchange rates with other international currencies

In 2016 the National Bank of Georgia introduced a new complete set of banknotes that were made with modern methods and had an improved level of security. These notes feature portraits of famous Georgian figures like the author Ivan Javakhishvili and illustrations of significant national buildings like the Zakaria Paliashvili Georgian National Opera Theatre, on the back of the 100 lari note.

Need to send money to Georgia? If you do, it may help to compare the Georgian lari to other currencies around the world and the currencies of neighbouring countries like Turkey and Azerbaijan. Learning about exchange rates will allow you to understand more about the Georgian economy. You will then be able to identify the best time to send money to your loved ones. So, let’s take a look…

Georgia also has a close financial relationship with Turkey. Therefore it’s worth taking a look at the exchange rate between the two nations. In 2022 the average exchange rate of the Georgian lari to the Turkish lira is around 1 GEL to 5 TRY. Despite the Georgian economy being relatively small its exchange rate with larger nations like Turkey is very promising, especially in recent years.

How can I transfer money to Georgia?

It is quick and simple to send money to Georgia with Small World’s easy and effective money transfer service. Now that you know more about the Georgian lari it will be easier to know where your money is going and how much it is worth in Georgia.

With Small World you can send money through a variety of services including cash pickup and bank deposit. This will help to get your money in the hands of family and friends as quickly and securely as possible. So if you need to support your loved ones in Georgia, choose Small World.