What is the currency in Morocco? 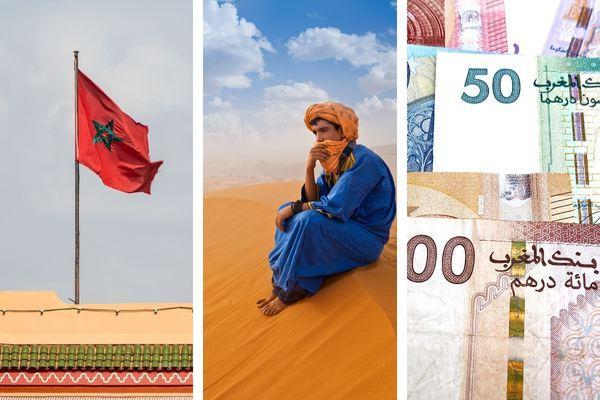 Anyone who has traveled to this colorful country will know that the currency of Morocco is the Moroccan dirham, or درهم‎ in Arabic.

But did you know the special meaning behind the Moroccan currency?

The country's currency - along with the current economic climate and the exchange rate - is an important part of the relationship between Morocco and its emigrants.

According to the Oxford Business Group, between four and five million, or 12% to 15%, of the Moroccan population currently live abroad. If you're reading this while living and working in another country, you could well be one of the 62% who left Morocco over the past 20 years.

Moroccans value their family and sense of community. It's deeply-rooted in their culture and way of living.

Perhaps you're Moroccan yourself who live and work abroad to earn money to send home. Did you know how big of a community you're a part of? The Moroccan community is expected to receive a total $6.8bn in international money transfers during 2021. [Morocco World News].

That's incredible and a powerful example of the country's community.

So, let's take a look at the currency used in Morocco and its history, as well as Morocco's economy today. This is what you'll learn about:

The Moroccan currency and its symbol

The Moroccan currency is recognised by the symbol .د.م. and it is also referred to as ‘dh' in English. The international currency code of the dirham is MAD.

Here are three quick facts about the dirham that you might not know:

The history of Moroccan currency

Like many countries, the currency in Morocco is a matter of national pride. One of the reasons for this is the important history linked to it.

According to Oanda, the Moroccan dirham dates back all the way to the Byzantine Empire. The currency then was the drachm, and it was used during the pre-Islamic era in what was then known as Arabia and the Levant.

The word Dirham originally came from the word denarius, which was an ancient Roman silver coin (originally worth ten asses!). Historically, in Morocco, gold, silver and copper coins were used, and they were called: benduqi, dirham and falus.

The modern system was introduced in 1882: one rial was split into ten dirham, which was then subdivided into 50 Mazunas.

Between 1921 and 1960, when Morocco became a French state, the country briefly used the French currency — the Franc. When the dirham was reintroduced, the Franc was still accepted until 1974. One dirham was worth 100 Francs.

It wasn't until the late 1970's that the National Bank took over the printing of banknotes and a new design was circulated. Moroccans met the dirham in the form it is in today, for the first time.

Well, how much of that did you already know? Not many countries can tell a history quite this colourful around their currency.

Today, as you’ll know, Morocco is a country that’s developing economically. Supporting this is a number of growth plans, both internally and with international support.

COVID-19 and a poor 2020 winter for Morocco’s agricultural sector have hit the country hard in terms of its economic growth. However, it’s right to remember that Morocco is not alone in this. The global economy has been impacted and The World Bank predicts that the country will rebound in 2021.

Last year, the King of Morocco announced a new plan to aid economic recovery, which will fill all those Moroccans living across the world with hope. The plan will be supported with a World Bank loan, including:

And, like many other countries, international money transfers from the Moroccan community abroad are helping improve the development of the country.

The exchange rate of Moroccan Dirham

If you don’t normally pay attention to the rates, let us help guide you through what they are and why they’re important.

In the past six months, the average exchange rates were:

At Small World, we’re constantly comparing the exchange rates we offer you to ensure the best value for money. You can trust us on that, or the 15 million customers who send money to their loved ones with us.

How do I send money to Morocco with Small World

We understand how hard it can be to spend time away from home.

We also know that cash is still important to the people of Morocco.

So, we have made sure that sending cash to be picked up by your friends, family and loved ones is something that is easy and straight forward. You can send cash to be picked up at one of more than 6,000 locations across Morocco, and you can do so in the easiest way for you, such as by using the Small World App.

Just choose what works best for you.

Of course, you can also send direct to a bank account. We take pride in our strong partnerships with the likes of Canal M, Albarid Bank, Bank of Africa and Wafacash.

Visit the Small World website to register, and get started straight away!